Sometimes when the apple of your eye is away for a long time or if you’re just embarking on a new love interest, getting a tarot reading can supply some subtle awareness. This is useful if you can’t speak with him or don’t want to appear too needy. A reading like this can give unparalleled insight into where this could be headed.

Free ‘Does He Think About Me’ Tarot Reading

Can the Tarot Tell You What He Thinks About You?

The tarot can indicate if he ever considers you, what’s on his mind at this moment in time and what he thinks about you in general. But this is not foolproof; it is only a bit of insight and wisdom from the universe. Whether doing a tarot reading for yourself or another, it’s important to remember that, in the practice of tarot, nothing is permanent.

So, while the tarot can give some in-depth insight into your connected energy with this man, nothing beats face-to-face communication. Take the information learned here for a more fulfilling conversation. 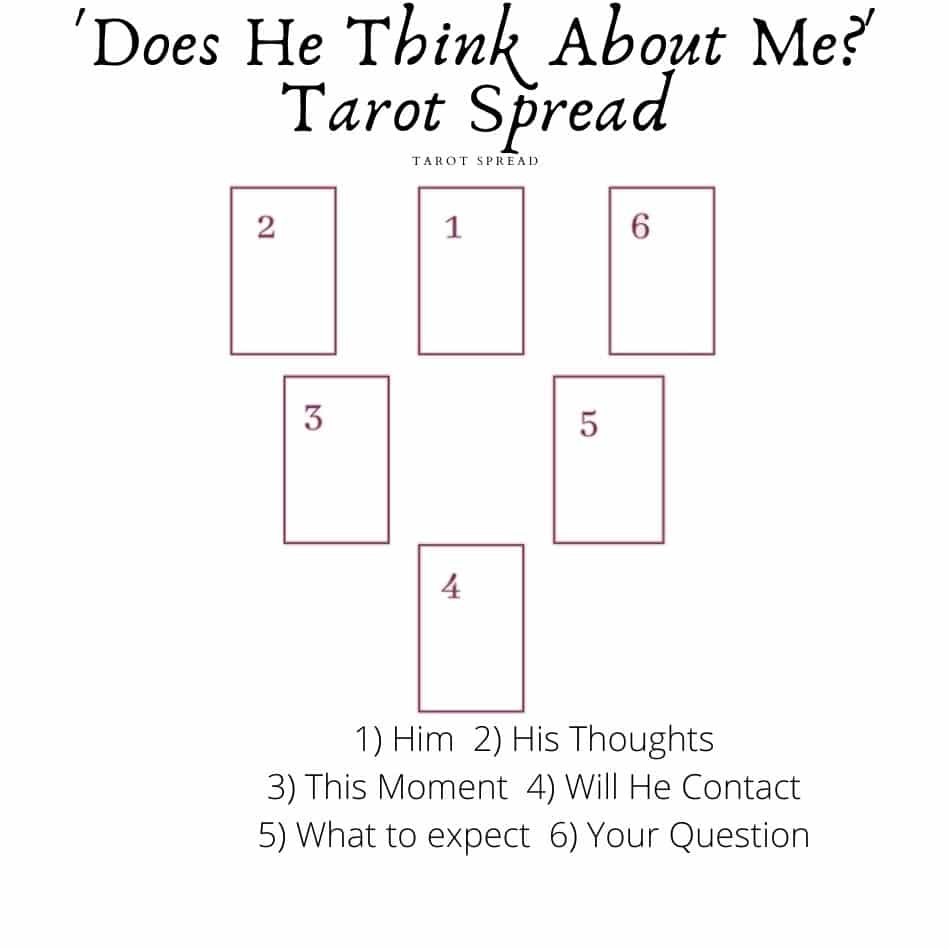 Before shuffling the deck, keep the image of your lover in your mind along with his full name. Focus on the question, “Does (his full name) think about me?” Repeat this as many times as needed, hold onto the focus and shuffle.

When you think they’re full of your individual energy, stop and cut the deck three times. Return them into one pile and spread them out before you. Select three cards and lay them out in a straight line from top to bottom.

The position of this card represents the person in question. Don’t pay attention to the gender on the image of the card, it doesn’t mean anything in this context. What matters is the interpretation. If vague answers riddle this card, select another from the deck.

If the Three of Swords appears, he’s the type of person who’s a bona fide heartbreaker. But, he’s an honest and passionate person when you see something like Temperance, The Emperor or The Empress. Alternately, if you see The Devil, it could indicate a very selfish person who’s hell-bent on his own sex life, lusts, desires and greed.

Card 2: If He Thinks About You

This spot gives an exact answer to the question, “Does he think about me?” This card’s answer is often implicit, explicit and direct, but it can indicate his hidden feelings. If you need further clarification of the meaning, pick an additional card.

Definitive answers with a positive influence will come from The Sun, The Chariot, The Star or The World. If The Fool pops up, he may be far too consumed with debauchery at this moment in time to think much about you.

However, if you see Judgment or The Hermit, it could mean he does think about you, but he’s very self-involved or is healing from a previous relationship in some way.

Card 3: What He Thinks About You at This Moment in Time

The card appearing here will describe his thoughts, feelings and ideas toward you. However, it can also indicate what you want him to think or what you fear he thinks about you. Remember, this will depend on how you focus and what you choose to hold onto when you shuffled the cards.

If you find the card is nonsense to the rest of the reading, it may be your mistake because you held onto unconscious feelings, your own individual energy and fears. If you think this is the case, redo the entire reading. In the rare likelihood that the same card shows up in the same position (or anywhere in the reading), you should take it to heart.

That said, if you see cards like The Empress, The Star or The World, he is very much in love with you and thinks highly of you. In the event The Devil or The Moon present themselves, then he is either very possessive of you, holding negative feelings or is being deceptive toward you (or, you are deceiving yourself).

For a quick tarot reading to see if your man will contact you soon, follow the directions as indicated above. But, this time, you will only select two cards. As always, if anything doesn’t make sense or sounds confusing, pick another card from the deck to get some elucidation.

This position will provide a direct answer to the question, “Will he make contact?” An affirmative or negative answer should be clear here. In general, reversed cards often mean “no.” But, it will depend on the deeper interpretation of the card itself.

If you see the 10 of Cups, The Star, The Wheel of Fortune or The Sun, he will definitely make contact. You should continue on with your everyday life when The Hermit, The Fool, Death or the Three of Swords show up. Because it may mean he will not be contacting you anytime soon.

There are many possibilities for what this position can connote. It can tell you the time frame in which you can expect to hear from him, explain what will happen when you do communicate or give suggestions for moving on if he won’t be in touch. The surrounding cards will determine what this interpretation means.

If you’re involved with him in a current relationship and you see something like The Tower or Death, then your conversation may end in a breakup. When unattached, these cards could be telling you to leave him alone. This will also hold similar implications if The Hermit or The Fool makes an appearance.

But, if you’re single and The Lovers, The Emperor, The Magician or The Wheel of Fortune manifest, then this relationship is about to take off in a major way. However, negative influences may be at play if The Moon, The Hierophant or the Three of Swords crop up.

Who is The Tarot Guru?

Just an everyday guy with a love (some would say an addiction) to the Tarot. You can read more about me here. You can also see the terms, Tarot readings should not replace legal or medical advice.