The Dreams of Gaia Tarot deck will lead you down a path away from traditional tarot towards a “new era” of tarot reading. As the cumulation of 10 years of work by author and artist Ravynne Phelan, this deck features a strong spiritual connection with Gaia(Mother Earth), bold and vivid artwork, and guidance toward intimate self-reflection and guidance.

It’s an interesting deck with a bit of a twist and it could be used by a tarot reader at any level though I personally would suggest perhaps avoiding it for complete beginners just to make the learning process easier.

The Deck: In the Box

As for the product details, the physical product is fairly standard. It’s a lovely deck artistically, and you’re getting the usual:

Details of the Tarot Deck

The Dreams of Gaia Tarot Deck is somewhat of a twist on the traditional tarot card deck.

While maintaining some of the structure of a traditional deck by using the major and minor arcana, the Dreams of Gaia deck combines this with new archetypes and meanings. 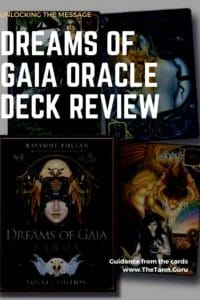 Like a traditional tarot deck, the minor arcana in the Dreams of Gaia Tarot has 56 cards.

A simpler to use oracle deck, I’ve reviewed the Moonlogy deck in more detail here.

It’s a different style of oracle cards and also brings its own twist into the mix with astrological symbology and lunar phases but it’s a deck I think is more flexible and also better suited to beginners.

This deck of oracle cards is described as a “Tool for guidance, insight, awareness, and support.” This is a similar theme to what the Dreams of Gaia Tarot deck focuses on, though since this is an oracle deck, it is even further from the traditional tarot structure than the Dreams of Gaia.

This deck has 46 cards and a 120-page guidebook that provides brief explanations of each card.

Like the Dreams of Gaia, the Sacred Earth Oracle deck has a very strong spiritual connection to the Earth and nature.

The Shamans Oracle is very unique for a variety of reasons. It will not have the structure of a traditional tarot deck and it is in many ways different than most oracle decks.

The Shamans Oracle deck is based on pearls of wisdom and teachings from shamans from all around the world.

Each of the 52 cards in this deck features artwork that was redrawn from photographs of original cave paintings that have been found in different parts of the world. This deck draws on very primal energy that will help with spiritual healing and meditation.

For those who are interested in more of a traditional tarot deck, The Star Tarot is an excellent option. This deck uses cosmic symbolism to move the user toward self-discovery of your soul’s purpose, personality, spirituality, and emotions.

This deck comes with an in-depth guidebook that gives detailed descriptions of the meaning of each card as well as explaining what the artwork on each card represents and why it was chosen. The cosmic connection of this deck could be a good companion to the Dreams of Gaia which focuses more on a connection with the energy of the Earth.

When to Use Dreams of Gaia Oracle Cards

Meanings Of The Major Arcana

Meanings Of The Minor Arcana

The minor arcana represents the temporary things that you may be experiencing in your life at any given time.

By explaining the things that may be happening in your life, the minor arcana allows you to find the guidance to embrace or correct the things that are affecting your day-to-day life.

This non-traditional deck is somewhat of a hybrid between a tarot deck and an oracle deck and will bring readers into a “new era” of tarot.

I like the twist and, as always, I think if the deck speaks to you then it’s worth it and if you wish to add a new deck to an existing set of tarot cards this is a solid choice. It wouldn’t be my first suggestion for a beginner, however.