Eight Of Hearts Meaning In A Cartomancy Or Tarot

What is the Eight of Hearts meaning when it appears in a Cartomancy or Tarot reading? What is it trying to tell you?

The Eight of Hearts is a symbol of long-term satisfaction, love and deep connections with others and the universe at large. This card often arrives when you’re at a crossroads with a choice to make.

This card has a fairly general message of long-term success for any situation and it’s almost always a positive sign to see – but if your reading or question was focused on a specific area, there might be a message you need to hear. I would caution against taking the simple message at face value and dig a little deeper into the message behind the symbol.

Eight of Hearts in a Tarot Reading

I’m rarely a fan of leaving everything to a single card. A full spread paints a more complete picture. To have your full reading done for you let me do a free reading on your behalf.

Overall, this is a positive sign to see as the eights often imply long-term success and the hearts often link to your connections to others (romantic or otherwise). In a general reading, this often looks at the bigger picture and, in order to get there, you need to be aware of the smaller things in front of your face. Sometimes, this means you need to be aware of your surroundings and mindful of the people in your life currently.

It’s sometimes a warning that there are some people who may not have your best interest at heart or are holding you back without meaning to. Depending on the cards surrounding it, it might be someone is even actively trying to prevent you from moving forward.

Eight of Hearts Meaning for Love

For your love life, this card means you will probably experience a big change. Depending on your situation currently, it can suggest a high-energy new relationship (potentially on the scale of a soulmate or twin flame connection) or it can mean turbulence and heartache in the short term.

Often this card arrives when you’re being offered a chance at something great but it’s going to be up to you whether you are looking for it or want to focus on other areas of your life.

The number 8 in numerology represents ‘the magic of power and influence,’ so is representative of great success and fortune in many areas. This might mean your love life or it might mean it’s a good time to focus on your professional life or even go and travel the world yourself. The message is one of success but it’s definitely a card that stresses that success is entirely personal to you.

If your love life is your focus right now, that is exactly where you’re going to see that success.

If you find this card appearing in a reading and you’re just not sure where you really want success at the moment – look at the surrounding cards to offer deeper guidance and advice.

Eight of Hearts Meaning as Feelings

For an insight into how someone thinks about you the eight of hearts can very much be a sign of a deep connection and is perhaps the closest card to suggest true love.

Remember that this card is a long-term symbol so how they currently act and feel might not always represent this as perhaps they haven’t accepted it themselves yet or, for whatever reason, they’re burying their feelings. Their actions may differ from their feelings and the way forward might be up to you. It might be that they fear being hurt or don’t think you’ll share the same feelings. It might be that they’re so distracted by other goals that they’re just not paying attention to their feelings but this card almost always means a special kind of bond between two people – however that manifests.

If you are asking if a specific potential lover has feelings for you, this card indicates that they do indeed feel very strongly about you. When it appears in relation to several other positive cards, there’s little room for denying that their feelings are strong and true.

Eight of Hearts Meaning as Advice 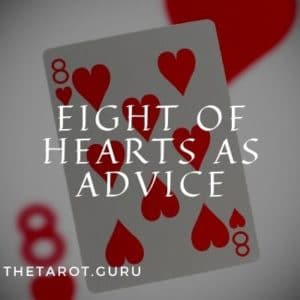 The Eight of Hearts is advice to handle a joyous but troublesome period in your life. If you’re feeling stuck or uncertain when this card shows up, it means you’re being offered a way to move forwards and the answer might be staring you in the face. Sometimes we can’t see the forest for the trees and we need a reminder to stop and take a look around.

This could be a romantic relationship, friendship or even family drama. The Eight of Hearts is advising you to handle the situation with caution and reservation. Be prepared to rely on those around you and to offer help to those who rely on you. It might be that your way forward or through an obstacle is something that can’t be done alone.

It might not be the time for foolhardy leaps of faith. Proceed with caution and keep the feelings of others in mind. Don’t let other people influence you to go against your own desires and don’t enforce your views on others.

Eight of Hearts Yes or No

In a simple yes or no question the Eight of Hearts tell us to follow the heart. Your intuition already knows the answer whether you’re listening to it or not. If you are in a situation where you have to make a big decision, ask yourself what would your heart tell you?

This card can’t be forced to give a simple yes or no because you already know the answer and it doesn’t want to influence you.

Eight of Hearts for Job Interviews and Money

If your question is related to financial future and investment, the Eight of Hearts card in a cartomancy or tarot reading means that there is something big on its way. It’s the symbol of long-term success and if this has been something you’ve been planning for a while – it’s at least a step in the right direction if not the end result.

The eights are often seen as lucky symbols for manifesting wealth and success but this card goes a little deeper. That success often comes through your bond and treatment of others. Nobody is successful in a vacuum and your success might come from your ability to bond and work with others. People will look to you for guidance and leadership and this might be how you unlock a brighter future.

As someone’s destiny card, this card often means emotional and spiritual growth on a level beyond most others. It’s the symbol of a person others are able to trust and rely on. Someone who is looked at for guidance and support.

As someone’s birth card, this card often represents the skills and talents that an individual is born with, many of which might even manifest in their youth but will certainly grow later in life.

As a birth card, it has a similar message to the destiny card, this is a person highly in tune with their intuition and capable of forming an instant and lasting bond with anyone they choose to be worth their time and energy.

On the spiritual journey, the Eight of Hearts is the symbol of victory through a commitment to a spiritual Path. It isn’t a sign of an overnight change but of long-term success and this might even signify the success of past life healing.

It’s the spiritual symbol of personal growth and change for the better. It heralds an opportunity for success in any situation if you have your heart set on it and allow yourself to be guided by your intuition. Sometimes challenges come from areas you wouldn’t expect and be sure to look to others in your life. Don’t try and tackle everything by yourself even when it feels like you must.

The Eight of Hearts in your dream can mean that you’re becoming too distracted by the short term. The hum-drum of everyday life and the monotony of obstacles in front of you can seem like they’re becoming commonplace but there’s a big opportunity in front of you if you’re able to look beyond that.

You should learn more about yourself in order not to miss out on awesome opportunities around you. The Eight Of Hearts card is always linked with your connection to others and it might be that your best way forward is by reaching out to someone, perhaps not the first person you’d expect.

The Eight of Hearts card is a powerful symbol with deep spiritual meaning. When this card appears in your readings, it is often indicative of new beginnings, change, and hope. Look to the long-term goals and your connection to others. Trust your intuition and those already in your life, trust that whatever changes come and that might be in the form of new people in your life.