What is the Eight of Spades meaning when it appears in a Cartomancy or Tarot reading? How does it answer questions and what is it trying to tell you?

The Eight of Spades is the symbol of lightworkers. It’s a message to the spiritual healers of the world and the higher calling that beckons to you.

Like most of the spades suit, it’s often misread a single message of sickness and sorrow but if we scratch just a little deeper there’s a very important message for spiritually attuned people. It’s the symbol of a lightworker and the universe is calling on you for an important reason.

This card can give you a lot of insight into your divine mission and how it impacts other elements of your life.

Eight of Spades in a Tarot Reading

If the Eight of Spades shows up during a Tarot reading tells us that our spiritual path is a unique one. You’re a lightworker. A spiritually attuned being capable of transforming any kind of darkness into light for themselves or for others.

You have the unique ability to see and change darkness or negative energy into light and to use that ability to heal others. You are responsible for the outcomes of your own future as well as that of those around you. You can make choices that will help others to lighten their own load, to walk the spiritual path with you, or to let them carry on by themselves. It’s important for you to be aware of the choice you are making in any given situation.

The decisions you make are going to have a huge impact. Not only in your life but they can ripple far beyond your imagination.

Eight of Spades Meaning for Love

If the question is for your love life then the Eight of Spades heralds a time of healing and growth. It’s a sign that it’s time to let go of the baggage from the past and look on towards a bright tomorrow. This might mean learning to move on from hurt of a previous relationship or see a way through the blockages of a current one.

Lightworkers carry a unique ability to see the way through obstacles where others would feel trapped and helpless. This bodes incredibly well for their own love life and relationships with others but they’re also beacons of powerful connections.

Other people in a lightworker’s circle will find strength and healing in them and gain a sense of hope from their presence. They attract their own high energy and intense connections by just being around you. Sometimes this means you’re called upon to help them navigate these waters but you’re perfectly equipped to do so by your very nature.

Eight of Spades Meaning as Feelings

This card can give some insight into how someone else feels about you. A lightworker can have complicated energy and while people are naturally drawn to you, they may feel like it’s a complicated situation.

This card is also good for informing you that you’re using your energy in the right place and to continue doing what you’re doing; speaking your truth out loud and living authentically, which often leads to others seeing how awesome one actually is. Lightworkers can feel intimidating at times and this can drive people away in the short term but those truly good for you will gravitate back to you quickly.

This card is a sign that you are the kind of person that appeals to them but the high energy of the connection is unfamiliar territory for them.

Eight of Spades Meaning as Advice 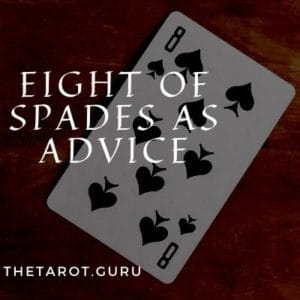 The Eight of Spades is advice to the querent that you also need to look after yourself and not just the others around you. As a lightworker sometimes you neglect to look after yourself in the process of caring for everyone else. No matter how much you give, you must learn to take too. If you neglect your own needs then you won’t be able to help others or yourself for a while as you recharge your spiritual batteries.

Make some time for self-care, be it in meditation, drawing, writing in a journal or having some quiet time alone. No matter how important things in your life can seem you can’t be solely responsible for fixing the problems for everyone else. Sometimes you need to take care of yourself too.

Eight of Spades Yes or No

When given a simple yes or no question the Eight of Spades echoes a very intentional yes from the universe. You will need to take things one day at a time and take charge of the outcome but in the end, you will be rewarded and everything will work out in your favor.

Lightworkers have the unique ability to bend the energies of the universe to their own will. As long as it serves themselves and others in the right direction.

Eight of Spades for Job Interviews and Money

When your spread is for your financial future (or current financial security), the Eight of Spades is usually considered to be an optimistic card for yourself but that can come with strings.

If your focus is too focused on the physical side of the equation you might be slowing yourself down. Focus on the process and progression of your life as a whole and see things progress naturally.

The Eight of Spades tarot card has several different meanings that are dependent on the cards around it. It can represent money, material rewards, physical property, or even property in general.

Treat yourself and find a way to manifest things that make you happy when it comes to matters of finance.

For a destiny card, Eight of Spades means high energy is before you. There’s nothing mundane or boring about the path you’ve found yourself on but very little of it will be outside your control.

You may be presented with a choice and the only way to know is if you make it. It’s not as daunting as it sounds; this is what having faith in yourself looks like. You’re more capable than you know and others will look to you for guidance and advice when they feel stuck. You’re able to look to yourself and your inner guidance the same way.

It’s an added bonus for those who seek truth beyond the material world as now there will be no doubts about your next steps.

As a birth card, the Eight of Spades is very symbolic of spiritual life. There’s more before you than the simple living for the weekend and focusing on your own self-interests. A lightworker is on a very different path to the humdrum of daily life for most.

It’s a symbol of a unique individual who has been put on a divine mission to help others – and this path will best serve themselves as well.

For the spiritual journey, the Eight of Spades is the card of death and rebirth. The end of a ‘normal’ path and the beginning of something far deeper. A lightworker often finds that their goals and motivations change over time as their spiritual journey leads them towards those in need.

This constant shift of energy will not phase you though, it becomes par for the course. There are still life lessons to learn, but you’ve got the knowledge and experience to get through anything by this point. This tarot card represents faith in self. It also encourages standing up for yourself- it’s time to ask for what you want!

Everything you’ve been through up until this point has been for a reason. It has prepared you for the next phase of your path.

Eight of Spades in a dream often tells us that there is someone else in our lives in need of help. While it might seem that people are constantly relying on you or maybe even expecting to much from you, sometimes the way through your own obstacles is by helping others.

You do need to stop and think about how much energy you are giving away to others and make sure you’re devoting enough time towards self-care to make sure you’re not being too drained of time and energy but you’re more capable than you know.

The Eight of Spades is a powerful symbol that can be used to tap into spiritual energy. When you are feeling lost or struggling, drawing this card can help give you guidance and direction.  There might be difficult times ahead but you are incredibly capable of handling them. Keep your head up and stay strong; soon things will start to look up for you. Trust in the universe and all will be revealed in time.