What is the Five of Spades meaning when it appears in a Cartomancy or Tarot reading? Why does everyone see it as a bad sign?

The Five of Spades is a symbol of unforeseen changes in circumstance. You’re playing a role in a larger cosmic game and, if you’re careful, this game is going to work out in your favor.

This card is often interpreted as a negative symbol (some view it as the embodiment of misfortune) but, like all cards in the deck, there’s a much deeper meaning than simple doom and gloom.

This card heralds an opportunity. Yes, if you let this go unheeded then it certainly can mean disaster but there’s an opportunity for true and lasting change here. With this understanding, the Five of Spades can be seen as a wake-up call or warning that something needs to change in order for the person to move forward on their journey. It is not a message to be taken lightly, but it can also offer hope.

Five of Spades in a Tarot Reading

To have your complete spread done for you let me do a free reading on your behalf.

When a Five of Spades arrives during a Tarot spread it signals a time of upheaval and chaos. The comfortable life you’ve been living is about to be upended and you’re being called to face the challenges head-on. This is not a time to shy away from difficulties as ignoring them is going to allow them to win.

Instead, it’s time to rise to the challenge and show the universe what you’re made of.

Are you a pawn in the larger cosmic game or are you a Queen capable of winning the game?

This is how you should be thinking. Are you satisfied with being a small piece in a much larger puzzle or do you want to be the one who affects change?

Remember, the Five of Spades can also be seen as an opportunity. It’s a time for you to face your fears and grow from the experience. This isn’t going to be easy but it’s more than just possible.

The potential change before you can be mindblowing.

Five of Spades Meaning for Love

For your love life, this card means you are likely to see changes in your relationships with others or see an important new person in your life. Be prepared to experience some upheaval in your love life. This could be anything from a new relationship starting to an old one ending. The important thing is that you are paying attention and not just sticking your head in the sand.

This is not the time to settle. Don’t worry about what others expect or think, just do what feels right for you. If that means breaking away from an old relationship then so be it.

Likewise, if it means committing to a new relationship then go for it! The Five of Spades is all about change so don’t be afraid to embrace it. This could be the start of something great.

This new energy might mean a change in a connection with someone already in your life or important new energy entering your life from an unexpected place.

Five of Spades Meaning as Feelings

For how someone else feels about you, a Five of Spades appearing in a reading usually means that this person is feeling out of control around you. They might not fully understand how they feel.

Remember that this card means change and how they feel about you might be in flux until you make a decision about something. Perhaps you need to be clearer with your intentions and desires. To them or maybe even clearer with yourself.

Either way, this is not a good time to be coy or unclear. You need to communicate honestly and openly if you want the relationship to move forward. This is especially true if there are any unresolved issues between you two. If this is something you want – go for it. This isn’t the time to sit back and wait.

Five of Spades Meaning as Advice 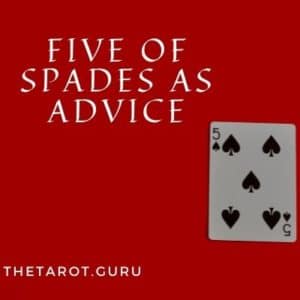 The Five of Spades is advice to listen to your gut. You might have been pushing yourself too hard and ignoring or brushing off your intuition. This is a time for you to slow down and pay attention to what your intuition is telling you.

While you’re at an important moment in time, it’s not time to wildly make choices without thinking things through. Perhaps taking a step back and re-evaluating how you’ve been doing things is the way forward.

The important thing is that you aren’t trying to control everything. Sometimes the best way to move forward is to let go. This is especially true if things have been feeling chaotic or out of control. Embrace the chaos, it might just be the push you need to change something for the better.

Five of Spades Yes or No

In a simple yes or no question the Five of Spades tell us that the answer is most likely going to be no.

This is because of the change that this tarot card represents. Nothing is guaranteed here and how things unfold is going to entirely depend on how you approach it.

Five of Spades for Job Interviews and Money

When your Five of Spades is related to financial future or career opportunities, it’s a warning to tread carefully. There are both advantages and risks before you – on a life-changing scale in either direction.

So it’s time to get strategic, and to be honest with yourself about where you’re at, what you want and what your motivations are.

This isn’t the time to do things you think others expect or things you think you should want. What do you truly want? There is a lot of potential energy here, but it’s important not to let greed or unrealistic dreams override common sense.

As your destiny card, this card often means that you might be experiencing setbacks but it’s not because things are destined to go against you. There’s a reason you’re not where you want to be (yet).

These setbacks are also a sign that it’s time to change your approach or how you’re currently doing things. Embrace the chaos and change that is happening in your life. It might just be what you need to move forward.

Remember. This card is a sign of a destiny you control. It’s going to be up to you whether you make the most of the opportunities in front of you or not. Steel yourself and take advantage.

As a birth card, Five of Spades often represents challenges or an uphill battle. Things won’t come easy but if you’re working towards the things you truly want then they will come.

There is a lot of change happening in this person’s life and it can be difficult to keep up. This is a time for them to pay attention to their intuition and gut feelings. If they do, they might just find the answers they’re looking for.

It’s the birth card of a person more able and willing to go for the things they want than most. They might have to work harder than some but they’re equipped to handle the challenge.

This card is a symbol of changes that might seem beyond your control but embracing the chaos and leaning into the turbulence will see you through.

In a spiritual path, the Five of Spades is a high-energy card that scares lesser people away. It’s the card of shaking things up, of chaos and change. It’s a symbol of the spiritual cosmic game that most of us are just along for the ride on.

If you’re on this path, it means that you’re ready for more. You might be feeling restless and in need of change. This is a time to pay attention to your intuition and gut feelings. If you do, you might just find the answers you’re looking for.

Embrace the chaos. Chase change and improvements. This card is telling you that the game is there for you to win.

A Five of Spades in your dream state often means that you are having issues in the real world because you’re not fully aligned with your inner desires. You might be feeling stuck and like you can’t move forward.

The Five of Spades is a card that represents change. In your dream, this might mean that you need to make some changes in your life in order to progress. It can also mean that you are feeling uncertain about the future but this feeling is intentional. You need to question where you are so you’re able to steer your future.

Pay attention to the signs around you and see if they offer any clues about the future. Perhaps the other cards in your spread will paint a fuller picture.

Don’t mistake this card as bad news. It’s seen as an omen of misfortune when really it’s a call to take ownership of your future and dictate your own fate. Much like the neighboring eight of spades this card carries a very specific meaning. You can ignore it but sticking your head in the sand is putting your fate in the hands of someone else’s actions instead of your own.