What is the Four of Spades meaning when it appears in a Cartomancy or Tarot reading? What is it trying to tell you?

The Four of Spades is the symbol of a short-term delay or obstruction. You might feel blocked at every turn but these delays are short-lived and persistence will overcome them.

Like many of the spades suit, this card is often misread as being a negative omen and an omen of solitude however if we scratch below the surface the deeper meaning is actually steering us towards a more positive place.

This card is really about taking a step back, re-evaluating and moving forward with a new plan. Turning obstacles into opportunity.

The four of spades card in a cartomancy reading can be a good sign.

Four of Spades in a Tarot Reading

If you would like your complete spread done let me do a free reading on your behalf.

The Four of Spades is all about turning obstacles into opportunities. In tarot readings, this card often signifies a time when you may need to be creative and think outside the box in order to get past an obstacle. You might have been feeling stuck, lost and uncertain about what to do but that’s because you’ve been looking at things the same way.

Be open to new opportunities and (even more importantly) new ways of thinking about things. You might need to face some delays but they won’t last long. Keep your head up and see challenges as the universe tries to help guide you forward.

There are no right or wrong choices here but following your inner guidance (your intuition) will help you shortcut these obstacles. It can be tempting to feel like nothing is going your way but as soon as you find something that truly resonates with you, you’ll see a big impact in your life quickly.

Four of Spades Meaning for Love

For your love life and relationships, the Four of Spades is a symbol of obstacles where you might least expect them. You might have had expectations for how things turn out but they’re moving slower than you’d like (or they’re not moving at all).

The blocks will be short-lived if this is a connection that truly resonates with you. If it’s a relationship you want to succeed then persevere and you’ll see how quickly things take a turn for the better.

It’s also a time for looking at things from a different perspective, being more open-minded and flexible when it comes to your partner. That might mean compromise or look at relationships in your life you hadn’t thought of in a romantic way before.

If you’re single, this could be a time when Cupid’s arrow finds its mark but don’t rush things. Wait for the timing to be right and let things develop naturally. There’s no need to force anything – the right connection will happen when it’s meant to.

Four of Spades Meaning as Feelings

For how someone else thinks about you, the card suggests that the person is feeling some kind of obstruction. It can be hard for this person to see things from your perspective and they might need some time alone to process things.

They might be confused about how they feel or distracted by other things in their life so much that they haven’t really thought about it. It’s a high-energy card so you certainly feature somewhere in their life but they’re unable to classify it yet.

Although it might not always seem like they’re not on your side, this card is actually good if you want this relationship to progress. It means that the person is thinking about you and it’s just a matter of time before they feel even more drawn to you.

In some cases, this card might suggest that the person is feeling blocked by their feelings for you. They know they like you but there are other factors at play (fear from past relationships or their own insecurities) that are getting in the way.

Four of Spades Meaning as Advice 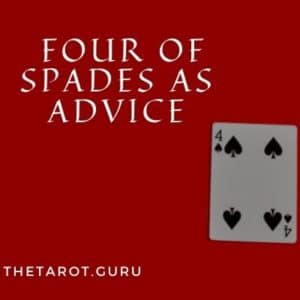 The Four of Spades tells you that you are about to receive some wisdom. This can be in the form of spiritual guidance or another form of knowledge, something that will explain your life to you in a way you hadn’t realized before.

These short delays are not just here to slow you down. They serve a purpose. They’re trying to get your attention to save you time in the long run. Your focus might have shifted or perhaps you’re spreading yourself too thin.

When faced with an obstacle, it’s time to take a step back, assess the situation and find a new way to approach it. There’s no need to reinvent the wheel here – look around you for inspiration. Other people have been in this same situation before and they’ve found a way to get past the obstacle. Learn from others that have done things you want to do.

Four of Spades Yes or No

When given a simple yes or no question the Four of Spades tell us no.

Like most of the spades suit, if you force it into a corner and don’t allow it to give guidance then it’s almost always a no. Things won’t just work out for you, this card is a call to take action and ownership of your immediate future.

Four of Spades for Job Interviews and Money

If your question is for your career or financially focused, the cartomancy reading is telling you that your financial future is up to you. The blockages you’ve been facing are because you’re focused on the wrong things.

Much like the next card (the Five of Spades) you’ve been held back for a reason. You’re heading in the direction and the universe is trying to help speed you up in the long term. It can be hard to see from where you are currently but it’ll be clearer when you look back in the future.

Stay the course and work towards the things you truly want and you’ll see the obstacles dissolve. You do need to make sure you’re not just going with the flow and focused on the wrong things. Sure, it’s great to be ambitious but make sure that what you’re chasing is really worth your time and effort.

Make sure it’s something you want and not simply something someone else wants for you.

As a destiny card, this card often represents many open paths before you. There are many opportunities for you and the key is to be open to them while focusing on the ones that truly and deeply resonate with you.

Be willing to change and adapt as you go along because things will not always be clear-cut. Don’t get attached to any single plan or path because there might be something better waiting for you down the road.

Be open to change. Be open to opportunity. Be open to the universe as well as your own burning drive. This is not a card of normality and simply coasting through life.

Whenever this card appears as a birth card, it shows a person with huge potential before them. This person is naturally creative and has a strong intuition.

The main challenge for this person is to learn how to focus their energies. Too often they can scatter their efforts and not see any real results. The key to success is in learning how to discipline oneself. This might mean setting realistic goals, learning time management or creating routines that support their creative energy.

They might fling themselves into new projects quickly but lack the drive to follow through with them. This is part of finding their true drive and once they do they’ll not want to turn back.

For a spiritual journey, the Four of Spades is the symbol of a journey’s beginning. It is also associated with the unfolding of the spirit and the development of physical life.

In general, it indicates that there are great opportunities for growth and progress. The main thing to focus on is not getting distracted or side-tracked by obstacles. Keep your eye on the prize and find new ways to approach old problems.

This is a time of great potential but also requires hard work and dedication both physically and spiritually.

A Four of Spades in a dream state often arrives when the dreamer feels that they have no control over a given situation. It might arrive in your dreams when you’re feeling stuck but it’s not there to highlight the obstacles – it’s showing you the way forward.

There’s a lesson to be learned here that is linked with divine timing. Sometimes the things we want most in life take time to materialize, we need to trust that the universe is working in our favor even when it doesn’t feel like it.

The Four of Spades is a powerful spiritual symbol. It’s often misunderstood (like most of this suit is) as a bad omen because it tends to arrive at times of struggle but it’s here to offer advice. There’s positive change before you if you’re able to hear the message of the cards properly.