What is the Jack of Diamonds meaning in a cartomancy or Tarot spread? What is it trying to tell you?

The Jack of Diamonds is often known as the curious messenger. The symbol of knowledge and wisdom matches with a wanderlust to explore and adventure. The sign of someone who knows what is expected of them but doesn’t necessarily feel like they have to play by the rulebook of others.

This card can give us insight and guidance into many different aspects of life however it can also be a warning in some areas. Let’s dig a little deeper into the full message behind the card.

Jack of Diamonds in a Tarot Reading

A single card can only tell us so much. The full message of the cards comes from how the cards combine together and (especially with a Jack) this is important. Let me do a free reading for you and we can dive into the full message.

Jacks are wild as they say and this is often true in Cartomancy as well. Jacks represent unexpected energy and change. This could be good or bad, but it will definitely be something that you won’t miss.

Similar to the neighboring Ace of Diamonds, this is going to signal some turbulence but it might be that’s exactly what you needed in your life. It might be that you already knew this change needed to happen and you’re just reaching a tipping point.

Before we start digging into specific meanings there’s one universal truth behind this card. Be prepared for this change. Don’t be afraid to let go of things that no longer serve you and move on to something new.

Jack of Diamonds Meaning for Love

For your love life, the Jack of Diamonds speaks very strongly on both new and existing relationships. Be prepared to be more adventurous and explore elements of your connections that you wouldn’t have considered before.

This doesn’t mean that things will be easy but it does suggest that you’ll grow as both an individual and as a couple. It’s often a sign that you’re ready to open yourself up to new possibilities even if you wouldn’t have considered this before.

Just be prepared for the fluctuations and potential turbulence this could bring in the short term. Some people around you might not understand your choice, but that’s nothing new. As long as you understand it.

Jack of Diamonds Meaning as Feelings

As an indication of how someone feels about you (and whether they potentially have romantic feelings), the Jack of Diamonds tarot card is quite direct.

It suggests feelings of curiosity and adventure. There’s a sense that this person wants to explore you more, understand you more and find out what makes you tick. A court card means they certainly see high energy (and potentially a kindred spirit) so you feature in their life.

They may not always agree with you but they’ll certainly be interested in you. This doesn’t automatically mean romance is ahead of you but it’s certainly a possibility.

Jack of Diamonds Meaning as Advice 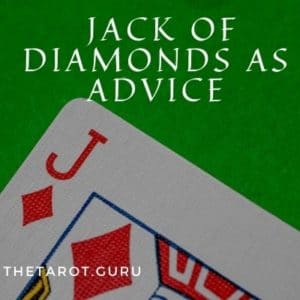 If we had to boil it down, the card is telling you to trust your curiosity and follow your gut.

The Jack of Diamonds is (partly) telling you to follow your own advice. Anyone getting this card in a reading already knows what they need to do on some level. You’re incredibly attuned with intuition and the Tarot cards are really just spelling out what you already subconsciously know.

The key is to have the courage to act on this advice. To trust your gut. Too often we know what we need to do but don’t take the necessary steps. This might be out of fear or uncertainty but it’s time to face that head-on.

Jack of Diamonds Yes or No

In a single yes or no question the card suggests the answer is yes but it will come with a cost. If this is something you truly want, go for it but be prepared to work for it.

Given the unexpected element of the Jack it might be more of a ‘yes… but…‘ as things don’t go entirely as you’d expected them to.

If you’re looking for an answer that is more specific (or provides better guidance) you need to go beyond a single card. This can be especially important for a Jack card. Take a few minutes and let me do a yes or no Tarot spread for you.

Jack of Diamonds for Job Interviews and Money

In general, this is a good omen for money, especially if that was the focus of your entire reading. It’s not the symbol of things just being handed to you but a sign that you’re uniquely gifted and have what it takes to attract some real wealth.

For job interviews, the Jack of Diamonds tarot card usually suggests that you’re in with a good chance. This is often because of your unique skillset and how you stand out from the other candidates.

The Jack card goes beyond a job, however. As someone curious and creative it’s an incredibly good omen if your question was related to your own project. 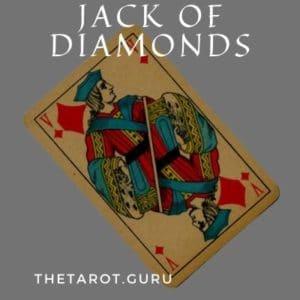 As a Destiny card, the emphasis really falls to Wanderlust. There’s a strong pull towards adventure, new experiences and travel. This isn’t just about going to different places but also about exploring different aspects of life.

It highlights change. Not only change in the short term but a life that isn’t lived on the couch in front of Netflix. It’s about embracing new opportunities, even if they terrify you at first.

It’s certainly not a sign of sitting still and settling for things you don’t truly want in life. The tarot is telling you to get up and go after what you desire, even if it means leaving some things behind.

The Jack of Diamonds tarot card is all about curiosity. Following your gut instincts and going after what you want in life. That is your destiny and the sooner you start it – the better.

As a birth card, the Jack of Diamonds tarot card is about new beginnings. It’s a sign that you’re incredibly curious and creative, always looking for new opportunities to explore.

This doesn’t mean you’re flighty or without focus. Quite the opposite in fact – you know what you want and are willing to work for it. The card is probably one of the rarer birth cards in my experience and it means anything but an ‘ordinary’ life. It’s a sign of someone who is always looking to push boundaries, to explore new horizons. The world is your oyster and you should make the most of it.

A sign of a life of adventure. One where you’re constantly learning and growing. Following your dreams and doing things that most of us will only dream of.

The Jack of Diamonds walks the fine line between both the spiritual and the physical giving us a glimpse into both worlds. It can be a sign of great abundance – especially in the spiritual sense.

It might be an indication that you’re about to receive some divine guidance, especially if you’ve been seeking it for some time. This is often in the form of an epiphany or a sudden realization.

This Jack’s biggest drive is internal. His own urge to explore and understand is stronger than anything external. It can be a sign that you’re on the right track with your spiritual journey but your future might be unlocked faster by looking inward.

When the Jack of Diamonds (or something representing its energy) appears in a dream it’s a call that you’ve become stuck. Your subconscious is telling you that the answer is right in front of you and all you have to do is take the time to look.

This is a tarot card of progress, so the dream might be giving you an indication of how you can move forward on your current project or goal. It might also be telling you that it’s time to reevaluate some of your recent choices.

The answer is probably not going to come from the first place you’d expect but if you trust your instincts and follow your gut you’ll unlock the answer in short order.

The Jack of Diamonds card is a powerful symbol with many layers of meaning. To some, it may represent the journey from innocence to experience, while others may see it as a signifier of change or transformation. No matter how you interpret its symbolism, the Jack of Diamonds is sure to catch your attention and heralds some real change in your immediate future.

Jack of Diamonds tarot card is all about curiosity. Following your gut instincts and going after what you want in life. That is your destiny and the sooner you start it – the better.