What is the Jack of Spades meaning when it appears in a Cartomancy or Tarot reading? What lies ahead and what deeper messages can we find?

The Jack of Spades is often associated with change, intelligence and a third party working against you. It heralds an exciting but also a nerve-wracking period where the outcome is going to be entirely based on your actions in the near future.

Like a lot of the spade suit cards, this is often misunderstood as purely a warning of someone or something working against you. Things are rarely that simple and the cards don’t just give us bad news – they provide guidance on how we can overcome adversity. If we dig deeper and follow this guidance – it can be a very positive card.

The jack of spades card arriving in a tarot reading is often a positive message.

Jack of Spades in a Tarot Reading

All cartomancy cards (especially the Jack’s) draw their full meaning from the other cards surrounding them. Don’t draw too much meaning from a single card but if you’d like a full insight I do free Tarot readings to give you deeper insight.

When the Jack of Spades arrives for a Tarot reading we often read it as an intelligent person actively working against you. However, if we scratch the surface of this symbology we can find a deeper meaning.

It does suggest that someone or something is standing in your way but this isn’t just a message that you should quit and accept defeat. Quite the opposite. We are being reminded that sometimes you have to turn around 180 degrees to find that your path has opened up.

Sometimes a roadblock prevents us from wasting our time and energy and this third party is actually helping you (whether they meant to or not). It can also point out a secret that’s been buried into the subconscious. Something you sort of already knew but can now see clearly.

Too often people misread this card as a bad omen. Just because things don’t go the way we had wanted or expected doesn’t mean this is a bad thing. The Jack of Spades actually points us towards a path we just hadn’t considered before. This is a similar(ish) message to the King of Spades in the sense that change is coming one way or another – but what direction it takes you is going to be entirely within your control.

Jack of Spades Meaning for Love

When your question is on your relationships with others or your love life in general, then the Jack of Spades heralds new developments and often not in the way you were expecting.

When this card appears in a reading, you can expect some exciting news or events to follow. This is especially true if the Jack of Spades has appeared with other court cards.

Sometimes it means things won’t pan out the way we are hoping or perhaps that our attention is too focused in one direction that we haven’t noticed an even better opportunity open up. Don’t read this as a bad sign if you were hoping for a relationship in particular to develop.

It isn’t saying no. It’s saying there’s a new way you’re going to have to approach the situation. A new path that will serve you better.

Jack of Spades Meaning as Feelings

This card can give some insight into how a person feels about you. The Jack of Spades can represent some complex feelings that are often hard to figure out because they’re not sure of their own feelings. This often manifests as them appearing hot and cold for no discernable reason.

The Jack is a court card which always means you’re on their mind but they might not fully understand why. Your energy stands out but if they’re not accustomed to that kind of person they’re often confused about what it means.

This card might also prompt you to examine your own feelings about them. Is it someone you’re attracted to? Is it just physical attraction or surface-level connections or is there something deeper at play here?

Jack of Spades Meaning as Advice 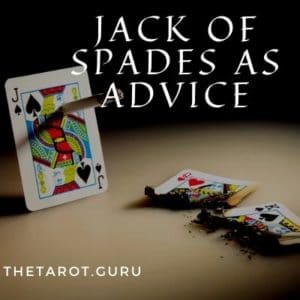 The Jack of Spades is advice to the querent (reader) to take careful notice of even some of the seemingly small changes going on around them. It might be you’re missing something in the bigger picture.

Court cards always indicate some high energy is at play and the spades suit means this energy can backfire against you if left unchecked. The arrival of this card means you should be alert and ready to make some important decisions.

Examine the people in your life who you trust. Who are you truly able to rely on? Be cautious about spending your energy on uncertainty but lean into your close connections. This card does not indicate any negative consequences, rather it warns you to be on your guard and stay alert. Be aware of those who may want to take advantage of you or obstacles that might delay your progression in life.

Jack of Spades Yes or No

For a simple yes or no question the Jack of Spades answers no.

Most of the spades are going to tell you that you’re responsible for the outcomes in your future so relying on the universe to deliver it won’t work out.

It may also mean that you’ve been deceived or lied to by a third party who has actually taken you further from your goals (whether they meant to or not). If left unchecked, nothing good is going to come from this interaction but there’s still time for things to work out in your favor if you’re paying attention.

Jack of Spades for Job Interviews and Money

When a card is related to your financial future (whether it’s a job interview, existing career or a business venture) your decision-making is going to have a bigger impact than you think in the near future. You do need to be wary about taking advice from other people, however.

If you’re just waiting for things to improve by themselves it’s unlikely you’re looking at long-term success. This card asks you to evaluate what’s going on and ask yourself difficult questions.

It might feel like you’re being led on by your emotions or that you’re just not able to make up your mind, but it’s important to think about whatever is going on in a clear way.

The Jack of Spades might also be a comment on the creative process. It may suggest that this is not your most productive creative period, but do not allow yourself to become stagnant either. Take time for introspection. What do you want to achieve? Are you truly working towards that?

For someone’s destiny card, Jack of Spades often represents a person who has the power to take control of everything in their path but they need to take ownership of this path or they risk being swept along by those around them.

They are ambitious, brave and hard working with a practical approach to life. If they’re able to focus fully on the right direction they’re unstoppable. They don’t give up easily but this can become a problem when they’re distracted by the wrong things.

When facing obstacles they’re often capable of finding creative ways around rather than slowly chipping through them. This can seem like impatience to those around them but those that see them clearly will see their passion is calling the shots.

Having this tarot card as someone’s destiny card can suggest that they need to set a future plan for themselves and work towards the correct goal for the things they truly want. They shouldn’t be allowing others to make important decisions for them.

As your birth card, it can tell us a lot about yourself and about your potential. This is not a card about hard work, however. It’s all about the wanderlust and the need to follow your heart in search of discovery.

You’ll not be distracted for long by the mundane and the boring. When others decide your path and direction in life you’ll often follow it for a short term before steering off on tangents without knowing it. The creativity of a Jack is hard to contain and there’ll be some in your who won’t understand your drive to do things your own way.

The tarot card meaning of Jack of Spades deals with taking initiative, learning new skills or creating something original that you can call your own. Your energy for starting new things will be unmatched but you’ll only stick with the things that truly speak to you.

On a spiritual meaning, the Jack of Spades is the sign of a good time to prepare for success. As long as you’ve properly aligned yourself a new path is about to open up before you. You will find a new method or approach for success. This is a time of trial and error, as the Jack of Spades does not come without an element of danger and excitement.

The Jack of Spades tarot card lets you know that risk and opportunity walk hand in hand. You must accept this duality and be willing to face it head-on but this is the kind of challenge you’ll relish. You can expect to be tested and stretched by this experience.

The Jack of Spades indicates that the time is coming for you to take a new path in your life, one that will lead you to greater success and happiness. It won’t be easy but it’ll sure as hell be worth it!

The Jack of Spades card in a dream state often means that you’re feeling alone and isolated in your personal life. It might be that you’re disjointed from the things you’re spending your time on and that can manifest as feeling stuck or unsure about what to do next.

The Jack of Spades tarot card is both powerful and scary; it’s about making tough decisions that require willpower rather than feelings.

The Jack of Spades is a symbol with many layers of meaning. It can be interpreted as a warning, an omen or even a wake-up call from the universe. However it decides to arrive in your life it’s always an important time and carries an important message that you shouldn’t ignore. If you see this card in a reading, take heed and listen closely to what it has to tell you.