Ten Of Spades Meaning: Look Beyond the Warning!

What is the Ten of Spades meaning when it appears in a Cartomancy or Tarot reading? How does it answer questions and what is it trying to tell you?

The Ten of Spades is often misread as an omen of sorrow and sadness but the deeper meaning is actually one of opportunity and progress.

When taking a single card at face value we sometimes have a habit of oversimplifying the meaning and with most of the spades suit that often gets misconstrued as a bad sign.

The Ten of Spades is a powerful card that often signals a time of change. This could be something positive, like finally achieving a long-held goal, or something negative, such as ending a relationship. No matter what the change entails, it will be an important juncture in your life. It can also indicate that you’re at a crossroads and need to make some big decisions. Be sure to trust your intuition in order to make the right choice.

It can foreshadow a period of pain and sorrow and if left unchecked but if you scratch below that it opens a world of possibility before you.

Ten of Spades in a Tarot Reading

To have your full tarot reading done let me do a free reading on your behalf.

When the Ten of Spades appears on a Tarot reading is telling us that a great change is coming. It can signify a change for the better or it can be more negative, but whatever happens, it will bring a big surprise.

Like most of the spades suit, the message isn’t simply that change is coming – it’s a message that we need to take accountability for the change in order to control the direction. If left unchecked the Ten of Spades can indeed be a warning of sorrow and pain on the horizon but more often than not it is simply a call to be aware of the twists and turns that are ahead.

If you’re able to remain mindful and spot the subtle changes you might even benefit from the high energy of the moment.

The number ten in numerology means an end or more specifically, endings. With this imagery, we can see why the Ten of Spades tarot card works so well with the tarot suits. It’s an ending but that doesn’t always mean a bad thing.

It could be an ending of an obstacle or challenge that has been holding you back. The card is here to tell you that change is coming one way or another, how it unfolds is going to be up to you.

Ten of Spades Meaning for Love

To look deeper into the tarot cards and find their true meaning, look beyond the obvious. Lean on the other cards in the spread to point you further if nothing pops out at you.

The Ten of Spades can signify a warning to take this moment as an opportunity to reflect upon yourself. It may also be telling you to focus on your own personal growth before moving forward with any relationship because something might not work out.

Perhaps your path forward with others begins by focusing on your own internal growth.

Ten of Spades Meaning as Feelings

The Ten of Spades can give some insight into how someone else feels about you but it suggests complicated emotions. It can be a sign that a third party has been affecting their opinion of you with unflattering opinions and rumors.

As a spade, it suggests their feelings are in flux and they might not even be ready to acknowledge how they truly feel or they may be unsure what to believe.

The path forward isn’t to go out on a limb or make a huge leap of faith. Instead, it’s to look inward and focus on yourself for the moment. Allow them space and time to see the truth of the situation and their feelings will become clearer both to you and themselves.

Ten of Spades Meaning as Advice 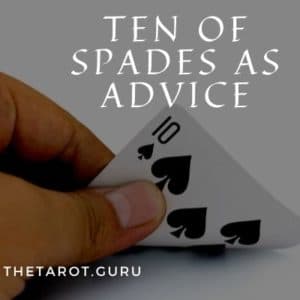 The Ten of Spades is often giving the same advice no matter what other cards surround it. It’s an omen of change on the horizon and telling you this isn’t the time to stick your head in the sand and hope for the best. The card is giving you a warning of warnings that things might get worse before they get better.

Unless you act now.

Your intuition might already know where this change is going to happen. If not, look to the surrounding cards for some guidance on where you need to devote your energy. Do you need to prepare for some travel? Are you going to have an important conversation with someone who might not agree on what’s best moving forward?

There are changes coming, whether you’re ready or not. The Ten Of Spades is giving you a heads up that this isn’t the time to pretend everything is fine and dandy.

It’s time to take a deep breath and forge forward. Your future isn’t determined by fate or destiny at this moment – it’s determined by how you follow up on this turbulence.

Ten of Spades Yes or No

For a simple yes or no question the Ten of Spades answers negatively. It’s a no.

It is a card that carries a negative connotation and therefore the ten of this suit in a cartomancy or tarot reading represents bad news, loss and sorrow.

This is not a card that wants to be narrowed down to a direct question. It wants to provide an open-ended answer to your future to help guide you but when forced to be a simple yes or no – it’s not good news.

Ten of Spades for Job Interviews and Money

If your reading is related to career, money or physical success in general the card is an omen of a crossroads in your fortune. If you’re in a situation where you’ve just received bad news about something that seems to be out of your hands then the tarot is giving you fair warning.

The tarot card can mean that there are factors at work beyond what’s visible, and it may be worth considering whether or not what’s ahead is indeed the best decision for you.

What is your intuition telling you? Forget conventional wisdom or what other people expect. What do you think you should do?

If the tarot card is accompanied by cards that indicate bad luck, a lack of fortune or a third party standing between you and your goal then you cannot ignore the warning.

You should try to identify what it is about this crossroad that is making you feel uncomfortable, as it’s likely more than just a feeling. Trust yourself!

As a destiny card, it can mean a few different important elements in your future. It can mean that if you are experiencing difficulties in your life, there is a reason why. You must look beyond these problems and discover what exactly is causing them. Whether it’s someone close to you or some other force at play, it’s something that you can’t ignore.

However, there’s a real opportunity in your near future. It might be a new job, an opportunity to take more control of your financial future or a complete u-turn on your current situation but it’s going to be up to you and how much you’re willing to commit to the situation.

This card is telling you to be on your guard. You may feel like there’s something or someone following you, either literally or just metaphorically. It might be that someone else is going for the same opportunity you are, or they’re actively working against your success out of spite. The sooner you spot the threat, the easier it will be to overcome.

When the Ten of Spades is your birth card it suggests a lifetime of endless opportunity that needs to be seized. A unique individual full of wanderlust of energy but they need to follow their hearts desires. Look beyond the norm and the restrictions placed upon you and the whole future can open up in ways that most people can only dream about.

The outcome of this tarot card varies depending on the individual, there may be an enormous amount of wealth or it could symbolize loneliness and isolation. It is up to them whether they find happiness within themselves.

In the spiritual meaning, the Ten of Spades is the sign of turbulence and upheaval of rivaling energies. When this tarot card is drawn in a tarot reading, it means that you have to keep your eyes open and be aware of the situation at hand. You’ll need to look beyond the warning and see what lies ahead.

The tarot Ten of Spades tells you that a lot of negative things are coming towards you and your higher self knows exactly how to deal with it but if you’re too distracted by the physical in front of your face you’re going to come out worse for these encounters.

The tarot Ten of Spades has laid out a warning for you that you need to listen to and pay attention! Don’t be caught off guard by the changes headed your way. This isn’t just about something you’re paying attention to but might come from the least expected place – and you’ll need to react quickly.

A Ten of Spades in your dream often means that you are beginning a new journey or path in your life. It can symbolize the sad emotions of grief and heartbreak, but sometimes it suggests that you need to be careful with money matters.

You might be on the brink of starting something new without being consciously aware of it yet. Your subconscious is already preparing you mentally for the switch. You might be going through a transition or a change in the way you think about things or how you act. You may also be going through a period of self-discovery and learning who you really are.

A tarot card reading can help you gain insight into your subconscious and answer questions about your own life.

The Ten of Spades card is a symbol that should not be ignored. Even if you don’t already know what you need to do, keep your eyes peel and stay mindful of the warning (and opportunity) before you.