Nine Of Spades Meaning: A Message of Change

What is the Nine of Spades meaning if it appears in a Cartomancy or Tarot reading? What is this card trying to warn you about?

The Nine of Spades is an often misunderstood warning card. While it is associated with disappointment, loss and betrayal it (like all cards) doesn’t simply herald bad news. It offers hope and guidance.

It does represent a message that you need to pay attention to but isn’t the immediate source of misery people sometimes assume. With an open mind and heart, you can use this information to help make positive changes in your life. It can be a good sign if you’re able to look deeper in to the message you’re being offered.

Nine of Spades in a Tarot Reading

A single card can only tell us so much as they receive their deeper meaning from the cards surrounding them. To have your complete spread done let me do a free tarot reading for you.

When the Nine of Spades shows up during a Tarot reading is a message telling the querent that they are coming to the end of something. Situations are about to change and if you leave them unchecked it can lead to disaster. At best, it can mean missing out on a real opportunity.

It is a transitional time, so be mindful of what you let go of and take care that you’re not just hoping for the best and sticking your head in the sand. It’s a time to be mindful of your actions even when everything seems like plain sailing.

The Nine Of Spades says there is no longer room for aggression or selfish behavior in your life. Whether this behavior is coming from you or from someone else. You have learned your lessons well and now it’s time to put them into practice.

The Nine Of Spades is a symbolic death (that doesn’t mean physical death), letting go of the past and moving forward with grace, wisdom and humility. It’s time for the querent to rethink their intentions, goals and desires before they manifest their thoughts into reality one way or another.

Nine of Spades Meaning for Love

As the Nine of Spades is often seen immediately as a bad sign it’s sometimes misread in a love reading as immediate bad news. It certainly can suggest that the querent is about to experience a gradual decline in their relationships with others but we can look deeper than that.

Any kind of death representation in that cards doesn’t immediately mean physical death or the end of things for good. It can mean the death of an aspect of your love life. Sometimes this aspect might just be the thing holding you back. A blockage prevents you from moving onward and that could be a person or just an element of your relationship with them.

For an existing relationship, it means some form of change is going to happen. That might be the relationship itself is coming to an end or some part of the relationship is about to change in a major way. It often arrives in a spread when the querent feels frustrated with the state of your relationship or love life in general. Don’t misunderstand the base meaning as necessary bad news but as an opportunity for change and improvement going forward.

Nine of Spades Meaning as Feelings

This card can give some insight into how someone feels about you. At a base level, it can suggest negative feelings but this might be closely related to the situation rather than you as a person. Something about the connection between the two of you is causing frustration or negativity.

It could also indicate that they are dissatisfied with the relationship. Maybe things are not the way they desire or there’s something external putting pressure on the connection. The nine of spades can mean that there is some obstacle between you and your lover. This could be past mistakes or spiritual reasons, such as having a link to an ex-partner.

Other cards (like the King of Clubs) in your spread might point you towards the source of this frustration if you’re trying to move things along and break down these barriers.

Nine of Spades Meaning as Advice 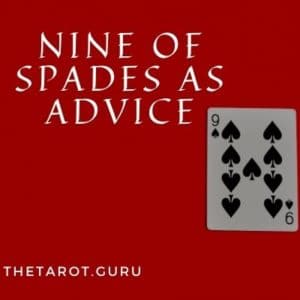 The Nine of Spades is advice to take a step back and consider what is going on in your life. Don’t let frustrations with short-term obstacles prevent you from looking towards the future because the death of current situations will be the rebirth of your future.

It may be true that things are not such a disaster as they seem, but you still need to take a break from whatever is weighing you down. The answer might just come to you if you allow your mind to relax and focus on other things.

You might want to ask yourself why this is so important to you, and whether there’s anything else that would give you more pleasure. Also, one of the most common mistakes people make is not considering the consequences of their actions. Why would this action lead to what you want? What are all the possible results? How will this affect your future goals and overall happiness in the long run?

Nine of Spades Yes or No

For a simple yes or no question the Nine of Spades means no, not as things currently stand. Change begets change and nothing good is going to come from being stagnant.

The number nine is associated with endings and finality, which means that the Nine of Spades portends a final answer for whatever questions it presents itself in.

Nine of Spades for Job Interviews and Money

When your reading is for your career or your finances, the Nine of Spades brings a warning that you may be in danger of having a job loss or financial reversal. Remember this card doesn’t always mean bad news however it does mean change. If you just allow that change to happen to you rather than taking ownership of your future, it’s going to go against you.

The Nine Of Spades may appear when your projects are struggling to stay afloat financially, or it seems like no matter what you do, things aren’t getting any better. You might feel let down by others in your life or the universe at large. On the other hand, it could be a sign that you might need to take a step back and look at what you’re doing and how things are going for you right now. Is there someone or something that has been dragging you down? If so, maybe it’s time to rethink your situation.

No matter your current situation this card is a sign to take ownership of the things to come. Change is on the horizon but where this change leads you financially is going to be up to you. It may also indicate a new job, a raise or that most of your hard work will finally reap rewards.

As a destiny card, it’s a symbol of someone who takes ownership of a situation and embraces changing situations and new frontiers. Someone adventurous and unwilling to allow others to call the shots or dictate how things turn out.

It doesn’t mean an easy life but that just keeps things interesting. Turbulence and high-energy moments mean opportunities for improvement and the kind of unique life few will ever experience. Embrace change and don’t settle for the same things others might.

For a birth card, this card often represents spiritual growth, spiritual knowledge and abilities beyond the norm. Being able to see change coming and react to it while others would simply hope for the best puts you in a better position to take control of your life. This means change – but change you can take charge of.

It means the ability to steer and control your life more than most.

If your reading is targeted towards the spiritual, rather than the physical, the change it talks about might be spiritually based. It means the end of something but the beginning of so much more. This could be a step further on your divine mission or a move towards enlightenment.

Nine is also a number that suggests there are more to come, representing beginnings. Together, this card might be suggesting that you need to expect endings in your life because new beginnings are right around the corner.

Remember, a single card can only tell you so much and if you’re looking for spiritual guidance you should be looking at it in the context of other cards.

The Nine of Spades appearing in your dream is almost always a sign of change and upheaval in the status-quo. The two most common interpretations are that you will experience a loss or that you are embarking on a new path in life.

Sometimes – it means a combination of the two.

There are plenty of cards that tell you change is on the horizon but this nine goes deeper. When this card appears in your dream it’s telling you about the changes that are happening on an inner level and it’s about to start being reflected in the physical.

It might be that you’re sensing change or seeing signs of it on the horizon but the message is simple. Take ownership and advantage of things changing, don’t just let them happen to you.

The Nine of Spades is a powerful symbol that can be used to help manifest your desires but it’s not a card to ignore. This is meaningful change on the horizon and it’s up to you to take ownership. If you simply sit back then this change is likely to go against you. That is why this card is often mistaken purely for a warning.

When you focus on the positive aspects of this card, you can use its energy to create change in your life. If you’re feeling stuck or like you’re not making progress, take some time to meditate on the Nine of Spades and see what guidance it has for you. Trust that the universe has your best interests at heart and allow yourself to be open to all possibilities.