What is the Queen of Spades meaning when it appears in a Cartomancy or Tarot reading? What is it warning you of and how can it empower your path forward?

The Queen of Spades symbolizes the end of something and the new beggings of something new. It’s a warning of setbacks and rivals but also an omen of opportunity and transformation.

This card has a fairly unique meaning in cartomancy or tarot readings. She is often misunderstood purely as a warning of female rivals and destructive forces in your life but if we scratch below the surface there’s a much deeper meaning here. She’s the symbol of divine feminine energy.

When seeing this card make sure you listen to this deeper meaning.

Queen of Spades in a Tarot Reading

All cartomancy cards (especially with a Queen or court card) draw their full meaning from the other cards surrounding them. Don’t draw too much meaning from a single card but if you’d like a full insight I do free Tarot readings to give you deeper insight.

Perhaps one of the more misunderstood cards in a Tarot or Cartomancy reading, the Queen of Spades is often thought to represent distrust and destructive forces in your life.

She’s often misread as a purely bad omen but the cards don’t arrive purely to tell us bad things are going to happen. They seek to guide us forward and help us.

The Queen of Spades tarot card meaning is about being true to yourself and not compromising your individuality for others’ approval. She’s somewhat similar to the King of Spades meaning in that she needs to take ownership of herself and her own actions (and he is often misread as a purely negative omen).

This card is a symbol of the divine feminine. We can all benefit from her energy as she reminds us to stay true to ourselves and empower the gifts we’ve been given. Sometimes reframing how we think of things can turn problems into strengths.

Also, don’t be fooled into thinking the Queen of Spades is just female energy. It can represent someone who lives more in their masculine energy while still being able to access their feminine side.

Queen of Spades Meaning for Love

For your love life, this card means a domineering female, a mother figure or a lover. She can also represent fertility.

This card is sometimes called the ‘woman of spades’. If you are single and looking for love this card is a great sign. If you have been with your partner for some time problems could show themselves as this card signals change is on the way.

It’s often thought this card is an immediate symbol of another person actively working against your relationship. As a purely simplistic sign, it means infidelity but take a deeper look at the message.

Especially in combination with other cards focused on your love life and relationship with others – this often indicates a way forward. A way through an obstacle or a path to become closer together.

The Queen Of Spades can also mean female dominance, motherhood or fertility so look at what aspect of your life the spades are coming up in to see if these are symbolized in your reading.

Queen of Spades Meaning as Feelings

The Queen of Spades can give some insight into how a person thinks about you, and how that might affect your future. She can give you some important insight into any kind of relationship whether professional or romantic.

As a symbol of how someone thinks of you, the card means that someone has been thinking of you in a good, positive way. If it comes up in a relationship position then the person feels that you are worthy of their respect and admiration. In your career or business life, the card symbolizes the high regard others have for your abilities and talents.

A court card like this almost always means they think highly of you and you represent an important role in their life. You might never be far from their mind but this kind of high regard can manifest in many different ways.

There’s an opportunity to further the bond between you if you chase it, but it’s unlikely to just improve if you want for it.

If the card comes up in your career this person wants to take advantage of your skills and talents, which is not necessarily negative if they also respect you as a human being. You might find that they make unfair demands on your time and you’ll need to nip that in the bud.

Queen of Spades Meaning as Advice 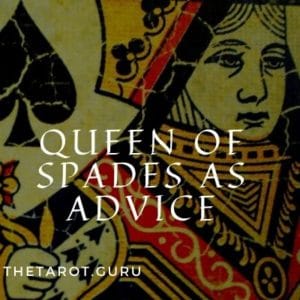 The Queen of Spades is advice to pay attention to your surroundings and watch out for danger. There’s an opportunity on the horizon but this also means there’s a risk for things to go against you.

It is a warning that suggests you may be involved in a situation likely to lead to loss or failure if others are allowed to call all the shots.

It heralds success only if you are able to see the larger picture and follow your own divine path. Don’t waste your time on things that are important to those around you but don’t resonate with your own goals.

This card can sometimes indicate a need for retreat as opposed to advance. However, this advice should not be taken as advice for every situation, only those where your intuition senses a problem ahead.

Queen of Spades Yes or No

In a simple yes or no question the Queen of Spades means “no“.

If you force this card into a simple yes or no, she’s going to err on the side of caution. You want to be careful and think through the consequences of your actions.

The Queen of Spades is a difficult card. If she doesn’t feel one hundred percent certain about the path she is heading down she’s not going to put her full energy behind it.

Queen of Spades for Job Interviews and Money

The Queen of Spades court card is an interesting result for financial questions and physical abundance. She isn’t as concerned with physical wealth but seeks something deeper and sometimes that’s disguised as the need for money because we often overlap desires.

The Queen of Spades is about having a vision for life, being open to change and new opportunities. She’s the seeker who isn’t afraid to ask questions or leave her comfort zone.

This can mean great success in business and abundance when you’re truly aligned with your purpose. If you’re just going with the flow and doing things because you think you’re supposed to or because others expect it – things are unlikely to go well. The

In terms of financial abundance, this is a card that’s about purpose. Having the money isn’t the end goal – it’s living your life with passion. If money comes along with that passion, that’s a bonus. The energy around earning or feeling rich is different from having the money because you’ve worked hard for it in alignment with your inner compass.

The Queen of Spades is a rare destiny card and can have a lot of deep hidden meanings that are often over-simplified. Generally, it relates to powerful feminine energy that can work in your favor but when misunderstood and wielded in the wrong direction it can backfire.

This s a powerful card with many different characteristics, but when broken down its meaning becomes more clear.

Be true to yourself and watch the universe align ahead of you. Allow yourself to become blinded and ignore that little voice inside and you’ll see failure after failure.

This can mean power or authority in some circumstances and the ability to overcome insurmountable odds. However, you’ve not been born with privilege and you do have to work for everything you want.

The Queen of Spade’s meaning is not always a warning of doom and gloom. It can indicate someone who will bring authority and power for a good purpose but still requires strong self-discipline to handle power.

As a birth card, the Queen of Spades can give us a lot of insights into someone’s personality and how they can make the most out of their destiny.

There’s no middle ground for those born under this card. It’s very much an all-or-nothing situation. You’re either in or you’re out. Successful or failing. When you align yourself properly there’s no stopping you but mediocrity is not for you and you’ll wither away if you try to live under elements of your life that don’t fulfill you.

Queen of Spades is an oft-misunderstood birth card and there are a lot of incorrect assumptions about what it means to be this Queen. It speaks to the divine feminine energy but that does not mean that only women are born under this card. It speaks to the spiritual energy and intuition of a person.

On a spiritual journey, the Queen of Spades shows the possibility of ascension along a divine mission. The divine feminine energy is more spiritually attuned than most others around them.

This can lead to… misunderstandings sometimes as people don’t fully understand what drives you. That’s okay, they don’t need to. They’ll only question you in the beginning but once you’re in motion nobody will get in your way.

All around, people are living their lives doing things they think they’re supposed to. This won’t make sense to you when you’re spiritually attuned to something greater. It can sometimes feel like there’s a disconnect between you and the existence others seem fine with.

The Queen of Spades reminds you that it’s time to walk a different path because everything has shifted. You have been put onto a new plane and the only way to move forward is by walking your own path, not someone else’s.

The Queen of Spades card in a dream state could arrive when there is a concern that the dreamer’s ambitions are beginning to be undermined. Something or someone is getting in your way whether they mean to or not.

Subconsciously you might be aware of it but your dream is trying to show you a way around this obstacle.

You might need to be more flexible with your plans. Maybe look at things in a new light or stop relying on people who are just slowing you down.

The Queen of Spades in a love-related dream state could indicate that the person you are interested in is not returning your affections because they don’t fully understand their own feelings yet.

The Queen of Spades is one of the more misunderstood cards in a cartomancy or Tarot reading. It’s a message of creativity and transformation and sometimes that can mean that things don’t always go the way you expect them to. If you truly align yourself with the things that matter to you deeply then this is always a sign of success.