Seven Of Hearts Meaning In A Cartomancy Or Tarot

What does the seven of hearts mean when it appears in a Cartomancy or Tarot reading? How does it answer questions and what is it trying to tell you?

The sevens of hearts in Cartomancy or Tarot means the seeker is on the right path and their intuition has been serving them well. However, a major mindset change can unlock a big obstacle.

This card often arrives for very specific individuals and situations. It’s a symbol of someone with unique abilities capable of doing things their own way which doesn’t necessarily fit with the expectations others have for them.

So what does its appearance in a reading mean? Perhaps most importantly how can you make the most of the message?

Seven of Hearts in a Tarot Reading

To have a more complete message from the cards, let me do a free reading on your behalf.

If the Seven of Hearts appears for a Tarot spread is telling us that we must be ready to make bold changes to the way we’ve thought of things and not be held by restrictions others have placed on us. Often, we don’t even notice this has happened but it has caused an obstacle holding you back from greater things.

This can take many forms (and isn’t always easy) from forgiving those who have wronged us in the past to taking a step back and looking at the bigger picture that we might have missed. Similar to the eight of hearts, it’s about looking to the long-term however the way forward here is an internal one. You are uniquely able to see things in ways that others are not and your creativity and ability will see you through any obstacle.

This card is asking us not to make the same mistakes we have made in the past. Look towards your future and remember how you want to be remembered after this life is over. You should not dwell on your wrongs or what has been taken from you, but instead look forward to the possibilities before you.

Seven of Hearts Meaning for Love

For love life, this card means you in the near future will find your true love in a totally unexpected way. It might not seem like a logical choice at the time but something is going to bring you to someone important. Someone who will see your unique flair and embrace it.

When you see this card in a cartomancy or tarot spread, it almost always means a major change is on the horizon. The marriage will be very good for both of you even though it was not expected to start out that way. Seven is all about balance, love and commitment. The Seven of Hearts in a reading indicates love will grow and deepen.

Given the unique symbology behind the seven of hearts, this often means a unique connection so we’re not talking about so this is beyond a simple date or a normal relationship. There’s something true and deep here.

Seven of Hearts Meaning as Feelings

For how someone feels about you, the 7 of Hearts can represent them feeling that you are an exciting person to be around. They enjoy your company and they want to spend more time with you. They see you as a unique individual and you’re certainly on their mind.

The seven of hearts meaning can also mean there’s an obstacle with someone’s true feelings. Perhaps something holding them back that they haven’t opened up about.

Seven of Hearts Meaning as Advice 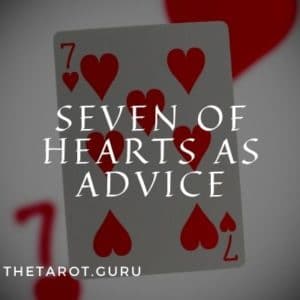 The Seven of Hearts as advice means looking at things in your own unique way. Your best answer through obstacles shouldn’t be dictated by the way others would do things when you know there’s a better way.

Daft rules and bureaucracy will hold you back from brighter things in your future – if you allow them to. Follow your own inner guiding light and don’t allow anyone to tell you that you’re wrong ‘just because’.

People are often resistant to new ways of doing things. They’ll be keen to tell you to stop if you give them a chance but they’re less likely to try and stop you when you’re already in motion. If you draw this card in a Tarot reading it is an affirmation of your beliefs and wants. It may be telling you to hold on and persevere when others have already quit.

Like all of the sevens, it can be one of the more complicated cards to interpret and will make the most sense given the surrounding cards.

Seven of Hearts Yes or No

In a simple yes or no question the Seven of Hearts tell us that our answer is no. At least that’s a no – not as things currently stand. In order to change things around you’re going to need to apply a new approach to the situation.

This may be further explained by the next card, which will expose some sort of hidden truth or deception that may need to be brought to light. The Seven of Hearts also signifies a reliance on someone else to make decisions for us, rather than making our own choices so it might be that you need to take more responsibility for your goal rather than waiting on others.

Seven of Hearts for Job Interviews and Money

If the card is focused on your career or financial goals it might be that you’re looking for new opportunities or feeling stuck with your current situation. The card heralds a big opportunity on the horizon but (and that’s a big but) you’re going to need a mindset shift to see it through.

You can’t keep doing the same things and expect something new to happen. Change begets change.

Change your mindset. Align your actions with this new mindset. Take advantage of the opportunity before you in a way that only you are uniquely qualified to do. This isn’t the time to just sit back and wait for things to come to you.

As a destiny card, the Seven of Hearts often represents a unique and spiritual person. Someone who is rarely limited by the expectations of society or doing things the normal way. Exceptional opportunity lies ahead but it relies on you to actively chase the things you want and not just wait for them to arrive.

As with most cards, the Seven of Hearts can have opposite meanings depending on the context in which it is drawn. For instance, if you’re looking for information about a past lover, this card may represent an emotionless connection. However, as the name suggests, if you’re asking about a future lover, this could indicate a deep and loving connection.

Whenever the Seven of Hearts appears as a birth card, restlessness and travel will be a theme. The Seven of Hearts signifies someone who loves spontaneity and surrounds themselves with others who can keep up with their energy and enthusiasm.

They’ve little time for people putting themselves or others in boxes and they seek out the weird and interesting.

For a spiritual journey, the Seven of Hearts is the sign of love, deep connection to the heart, and family. The number seven is traditionally the most powerful of all numbers in numerology. It implies a journey that takes unexpected turns but ultimately arrives somewhere meaningful.

Sevens are often very protective of the people they care about and deeply connected on an emotional level – it’s no surprise that hearts play a large role in this card. This is often the card that comes up when you’re looking to follow your heart, or when it’s time to create deeper connections between people close to you.

A Seven of Hearts in your dream state could arrive when you feel restless and in need of real and meaningful change. It represents an urge to buck that status-quo and do things your own way.

It often arrives in a dream when you know there’s a better way of doing things but so far you’ve been going with the flow because that was expected of you.

The Seven of Hearts is a powerful symbol that can be used to manifest your desires. When you focus on what you want and put positive energy into the world, the universe will help you manifest real and meaningful change. There’s a unique energy to this card and a rare opportunity for change.

The Seven of Hearts in a cartomancy or tarot reading can generally mean that the seeker is on the right track and that their intuition is serving them well. There’s more out there however, you just need to take the time to figure out what you truly want.