What is the Seven of Spades meaning when it appears in a Cartomancy or Tarot reading? How does it answer specific questions and what is it trying to tell you?

The Seven of Spades means you have a better insight into the world around you than most but others doubt holds you back. Your own intuition is highly attuned and you might have turned to the cards to tell you what you already knew.

The Seven of Spades is seen as a confirmation card but, as a spade card, it’s also often misread or misunderstood as bad news. It’s seen as an omen of approaching disaster or failure but it can be the exact opposite. In a cartomancy reading, the Seven of Spades can also indicate new opportunities arising from difficult times.

Let’s break it down a bit and hopefully get beyond the simple misunderstanding of a complicated card.

Seven of Spades in a Tarot Reading

Cards like the 7 of Spades derive their fullest meaning from the other cards in a spread. Relying on a single card is just crippling its ability to give you the full story. To have your full cards for free let me do a free reading for you.

The Seven of Spades in a Tarot or Cartomancy reading often arrives when you already know the answer but need to confirm or perceive it.

At the last, your subconscious already knows exactly what you need to do.

Either consciously or subconsciously you’ve already been working towards exactly the outcome you want and this card appears not to tell you what is going to happen but how you can continue this path to make it happen.

Most of the spades cards can be incredibly positive signs but they’re not omens of the future just being handed to you. There’s an opportunity for a big change but it relies on you taking action on it and if we scratch a little deeper in the meaning, the cards can be offering advice on how to get what you want.

So the Seven of Spades is often an indication that you’re not alone in this. The universe wants you to succeed. You’re part of something bigger and there are people, places or forces at work with you to make it happen.

It can be disconcerting to see this card turn up because it can be a confirmation of your fears but also of your opportunity to make things better.

Seven of Spades Meaning for Love

Seeing this card for love or relationships is a sign that you have a real chance at a deep and meaningful connection that few get to experience – but it’s not just going to be handed to you.

Whenever the Seven of Spades shows up for a relationship tarot spread, it suggests that you truly know deep down how things currently stand. Maybe there’s an obstacle in the way or maybe things are progressing slower than you would like.

Either way, it’s time to take an honest examination of what you really want out of a relationship. You might be quick to jump to an answer on this but does it feel right? Does it match up to your intuitive gut feeling?

Only when it feels right and good and is completely in line with your higher self should you move forward.

At the end of the day, tarot readings are one tool that you can use to help yourself but they do not make decisions for you. Instead, tarot cards give you insight into your own psyche and let you guide yourself through life.

This is especially true of the 7 of Spades.

Seven of Spades Meaning as Feelings

For how a person thinks about you, the Seven of Spades often suggests you already know how they feel on some level but this might be manifesting in an unexpected way. Perhaps they’re not consciously sure of their feelings or they’re dealing with something distracting them from their feelings.

Emotions are complicated, even if two people think the exact same way about each other, that doesn’t guarantee that either will act as you’d expect. Especially with the seven of spades – it’s a complicated card.

For the querent, this tarot card suggests either they or their love interest may be experiencing an unexpected feeling for you. If you were expecting them to act one way and they behave in another, follow your intuition. It will not lead you astray.

Seven of Spades Meaning as Advice 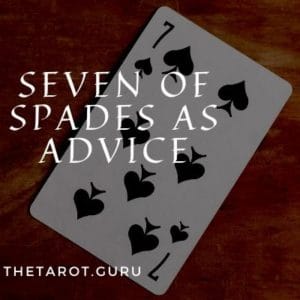 The Seven of Spades tells us that a time of great change is ahead. It’s the card of carpe diem, seizing opportunities and making the most of what fate has brought you. More importantly, these opportunities might not be obvious or from where you expected them.

The Seven of Spades is about self-motivation, an entrepreneurial spirit, looking at things from a different angle and playing by your own rules. If you’re feeling lost or stuck in a rut, the Seven of Spades tarot card offers you an opportunity that only appears at times like this.

The Seven of Spades meaning is not about complete upheaval and drastic change, but rather a subtle shift in perception and outlook so that opportunities present themselves. The challenge may be to recognize them and it might mean reframing your view of what you can accomplish.

Seven of Spades Yes or No

In a simple yes or no question the Seven of Spades tell us that no answer is coming.

If you force this card to give you a simple yes or no, then whatever the current situation is is going to continue. Progress in your immediate future is going to depend on you.

This can be disappointing but it doesn’t mean that the question asked will never have an answer, only that it’s not coming immediately if you’re just waiting for it to happen.

Seven of Spades for Job Interviews and Money

When a card is for your career, it can be difficult to interpret sometimes by itself. It’s often misread as purely a bad omen for your finances. It seems to arrive when you’ve been previously overlooked or have had underwhelming results.

Whether this is a good omen or not, really depends on how you’re able to listen to your intuition. There’s an opportunity ahead to turn things around but if you do nothing then you can’t expect to see things change.

If you’re asking about your career, this card shows up when the next step is clear to you but not necessarily to others. It’s time to fix mistakes or correct something that wasn’t quite right before.

Sometimes this might lead you to make a big change that others won’t always understand but your success isn’t based on what they think. It’s based on your actions and your own drive.

For your destiny card, Seven of Spades can tell us that you are going to be faced with obstacles to overcome but you’re equipped enough to handle them. The potential results before you are open but entirely down to your efforts.

You will also be very curious and tend to ask a lot of questions. People may think that you’re overthinking things but that’s just the way your mind works. Be open to their advice but not reliant on their direction. Following your own inner intuition will serve you better.

There would also be many opportunities available to you so it’s not wrong to take advantage of them. Try your best to understand the situation better instead of rushing in blindly but don’t overthink things if your gut is clearly pulling you in that direction.

Whenever the Seven of Spades appears as your birth card, it suggests there’s nothing common about your future.

Similar to the neighboring eight of spades, there’s a calling awaiting you but the direction lies entirely at your own desire. There are many crossroads ahead and your own decisions are going to dictate the rest of your life.

The Seven of Spades is perhaps the most important card in tarot readings because it calls for a re-evaluation so significant, you’ll be forced to confront yourself with an honest heart. If you’re not faced with this stark reality at least once during your lifetime, you’re not living up to your greatest potential.

For the spiritual meaning, the Seven of Spades is the card of perception and intuition. It suggests someone who can see the truth in situations and look beyond what others incorrectly assume or expect. This tarot card speaks to the value of being aware of one’s surroundings, being honest with oneself and trusting one’s intuition. Seeing the truth in situations where others would just accept things at face value.

The Seven of Spades asks us to consider how we are responding to what is happening in our lives, as well as how open we are to receiving messages from the universe.

The Seven of Spades in a dream is telling you that you’re following a path that goes against your inner guidance. Your subconscious is screaming at you to change course now.

The sooner you abandon your current path, the easier it will be. If you continue down that road, you may end up triggering a self-destructive cycle that will be harder to come back from.

The card might appear as the card itself or be symbolized in your dream by an impending character trying to push you in a different direction.

The Seven of Spades card is a symbol that stands for intuition and potential self-sabotage. It’s important to realize when you are being your own worst enemy and find ways to avoid this behavior in the future. Some ways might be recognizing what triggers these behaviors, avoiding those triggers, or replacing bad habits with good ones.

You have some real opportunity here before you but it won’t unfold the way you want it to if you’re just waiting to see what happens.