The Death Card Yes Or No Tarot Meaning

What does the Death card mean in a yes or no Tarot reading? Is this card trying to warn you of something?

The Death card is not a harbinger of physical death. It’s not always a bad sign either. Death can either be a yes or a no depending on the position of the card and the situation surrounding your spread.

Any major arcana suggests a turbulent and high-energy change is on the horizon but the Death card specifically calls for change. Forget the Hollywood use of the card it’s not always a bad omen in a  yes or no Tarot reading or any spread for that matter.

However, it is important to understand the message of the card and what it’s trying to tell you. We’ll break down the different positions and types of questions to help you get what you want.

Does the Death Mean Yes or No? 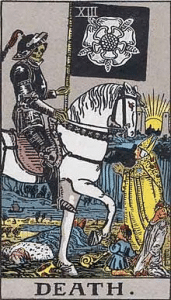 The Death card is about change so whether it’s answering yes or no can really depend on the type of question you’re asking (we’ll get to some specifics further down the page). If you’re asking for things to say the same the answer is no. If your question involves change then the answer is probably yes.

But things are not always that simple and the card might herald a change in a direction you weren’t expecting, so let’s dig a little deeper.

Upright Death as Yes or No Question

When your card is upright that tells you that you will experience a powerful movement in your life that will help you to resolve any outstanding issues. This moment might be turbulent in the short term (similar to The Tower level of change) but, as the adage goes, sometimes you have to break a few eggs to make an omelet.

The message is that it is time to get rid of any excess and to focus on what truly matters. Leave behind the things that no longer serve you and accept the change that comes.

Reversed Death as Yes or No Question

What are you resisting?

When the card is reversed it’s often a sign you’re resisting this change for one reason or another. It might be you’re afraid of something bad happening or even afraid of finally being successful because you’re so used to the grind and the struggle. You might not even be consciously aware that you’ve been struggling against this shift.

If you are afraid of change, the Death Card can be a sign that you need to face your fears. Change is an inevitable part of life, and it can be a frightening prospect. However, embracing change can also lead to new opportunities and experiences.

With a card like this, we should really go a little deeper. A single Tarot card can only tell us so much. You can unlock the full message with a free Tarot reading, take a few minutes to give me the details and I’ll do a free spread for you within a few hours.

Upright Death as Yes or No for Love

Yes, if your question is about change.

If your question was about a new relationship the answer can be yes because something (or someone) is coming towards you but it’s often not as simple as just waiting for it to happen. There are plenty of other cards that give a simple yes, but you’ve been sent this one. It might be that there’s transformation to do before you’re ready or an external transition that’s going to come first.

For existing relationships and upright the Death is telling you that it is time to end this particular cycle. Whether it be a bad habit you or your partner have, an unhealthy routine, or simply that the relationship has run its course – it is time to say goodbye. The upside is that this finality can often provide powerful movement and resolutions.

If you are considering death in a reading about love, it is important to look at what is being asked about the relationship. Are you considering ending things? Or might your partner be on the verge of departing? Death in a reading can also indicate big changes or transformation – so don’t be too quick to write things off.

Reversed Death as Yes or No for Love

No, you’re in your own way.

Reversed in this position, the Death card is a symbol that you’re holding yourself back (whether you intend to or not). It tells us that you fear change and that you are holding onto the past. You may be afraid of new beginnings or of stepping into the unknown. While understandable, and possibly brought on by past experience, the card asks you to take a fresh start. A new beginning.

If you’re single it’s time for some growth. Be open to new opportunities and the chance for self-improvement. Perhaps focusing internally for a short while will be the answer to meeting someone else. Focus on yourself for a moment.

If you’re in a relationship – it’s either time to end it or time to change the things that need to be changed.

Upright Death as Yes or No for Advice

Yes, as long as you ditch the dead weight.

As for advice, the Death card is a symbol of a cycle coming to an end and an opportunity arising for positive change. The best way to see this positive shift is by leaving behind the things that no longer serve you. It’s time to get rid of anything that is excess in your life. There is a powerful movement ahead and resolutions will be made.

What you make of this opportunity will, ultimately, be up to you but a major card like this doesn’t speak to small changes or opportunities.

Reversed Death as Yes or No for Advice

No, something is holding you back.

Reversed, the meaning is very similar except that the answer is no for now.

There’s still an opportunity before you but you’re not yet ready to let go of the things holding you back in the current situation. There is resistance to change and you may be stuck in a rut or overly dependent on others around you.

Before you’ll be able to move on, you need to first learn to spot the negative patterns you subconsciously repeat.

Upright Death as Yes or No for Career and Finance

As a career and financial abundance, the Death card is often misunderstood as the end of things but it’s actually a symbol of positive change and new beginnings on a better path. However, if there are excesses in our lives, things that we can’t or don’t want to let go of, there might be some turbulence in getting there.

A major arcana like this is always a positive answer for a question about physical wealth and abundance but this card also brings some guidance that making it happen might take some short-term discomfort.

Reversed Death as Yes or No for Career and Finance

Yes, if you stop holding yourself back.

Reversed, the message is clear. You’re holding yourself back financially by resisting change and fearing new beginnings. It might be success itself that you fear (subconsciously) and you’ll self-sabotage until you’re ready to accept what you need to do and face.

You may also be overly dependent on repeating negative patterns and feeling stuck in your financial situation. These blocks can be overcome but nobody else is going to be able to do it for you. Take an honest look at how you’ve been holding yourself back. With some acceptance of this (and some hard work) the opportunity for better things is before you.

Death for Trust: Should You Trust Them?

For whether or not you should trust someone, the Death card means being willing to let go of one thing to make way for the new. It’s the end of a cycle and that means time to get rid of the excess. Trusting someone can be a huge step, and the Death card reminds us that endings can be powerful movements in the right direction. When we trust, we allow ourselves to be open to new possibilities.

If this is someone new that you’ve been resisting, it might be time to let them in.

If it’s someone who’s been taking advantage of your trust and holding you back, it’s time to cut them loose.

What Is the Death Trying to Tell You?

Aside from a limited yes or no answer, the card has a deeper meaning that you shouldn’t ignore. There’s some big change on the horizon and while the result itself is welcomed the shift to get there might be less than comfortable. It’s a necessary part of the cycle of life and is likely going to happen one way or another.

However, if you’re able to take on the message this card is giving you, you’ll make the most of the new opportunities. It’s a time for resolutions and new beginnings. But before you can move on, you first have to let go of the old.