Three Of Spades Meaning: Turn Turbulence To Your Advantage

What is the Three of Spades meaning when it appears in a Cartomancy or Tarot reading? What is it trying to tell you?

The Three of Spades heralds unexpected change and misunderstandings. If you’re able to spot where it’s coming from in time you can turn it to your advantage.

Like most of this suit, it’s often misread as purely a bad omen of things to come but if we scratch a little deeper there’s some real opportunity before you.

Three of Spades in a Tarot Reading

Want to really unlock the message? Have your complete spread for free let me do a free reading on your behalf.

When the Three of Spades shows up on a Tarot reading it means you have to pay attention. Something is heading your way like a freight train about to collide with your world.

And potentially turn things in your favor.

Don’t be tempted to ignore the message of this card (as we often want to). Allowing others to define your future won’t work out well for you. The Three of Spades is a sign that you need to take things into your own hands.

This can be in any aspect or arena of your life – from career change to personal relationships. You have the power to make things happen but there’s a real risk of hurt if you just let it happen.

Three of Spades Meaning for Love

When our question is for your relationship(s) it’s telling you that change is coming one way or another. Misunderstandings might take things down a road you don’t expect and it’s sometimes a sign that a third party is actively working against you.

There is a real opportunity before you for positive change. If you’re able to pay attention and react in time. The warning with this card is that things might not go the way you want them to. Be prepared for a bumpy ride, and don’t take anything for granted.

If you’re single, this could be a sign that someone is about to enter your life – but be careful as this person might not be all they seem at first glance.

Three of Spades Meaning as Feelings

For how someone else feels about you, the Three of Spades is telling you to pay attention to how they act, not just what they say. They’re trying to reveal their true feelings to you, but there might be some hidden agendas or some confusion about how they really feel.

You could be feeling out of control in this relationship as if you’re on a roller coaster ride with lots of ups and downs. It’s time to face up to what’s happening and take charge of your own feelings. If you’re not careful you could get hurt.

This is a time for reality, not sugarcoating or wishful thinking. Be honest about what you want and how you feel about them.

There is a real opportunity for connection here, but it won’t be easy. This person is worth taking the time for though if they’re genuine with you. If things progress well, this could lead to a really fulfilling relationship.

Three of Spades Meaning as Advice 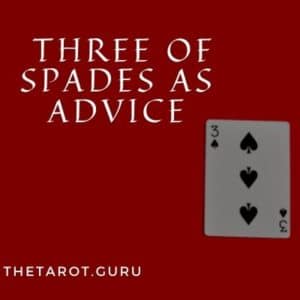 The Three of Spades is advice to the querent arrives as advice is telling you to face up to what’s happening and take charge. This could be in any area of your life, but it’s especially relevant for your romantic and professional life.

If you stand still and don’t move bad changes are on the horizon. Something is hurtling towards you and it’s not going to miss.

If you’re able to spot this change in time and step aside, a brand new opportunity is going to open up. But just be careful that you don’t misstep. Now is the time for honesty and openness – both with yourself and with others around you.

Three of Spades Yes or No

When given a simple yes or no question the Three of Spades answers with a warning. A maybe. A probably no, unless…

As things stand it’s not going to go the way you want it to however if you’re able to dig deeper and prepare yourself for some bumps in the road then there’s some real potential of getting what you want.

Especially if your question was related to your relationships or working with other people.

Three of Spades for Job Interviews and Money

If your reading is related to your financial future or professional life then the Three of Spades is a message that you’re going to have to take accountability for yourself.

Change begets change. If you continue down the path you’re on, nothing is going to change. You have to take matters into your own hands and make it happen.

This doesn’t mean that it will be easy, but you can’t rely on anyone else to make things happen for you. Especially if money or a job is involved. The Three of Spades is telling you that there’s a real opportunity here, but it won’t come to those who wait. You have to be proactive and take seize the bull by the horns or be run over.

That choice is going to be yours and you’ll be the one reaping the rewards or picking up the pieces.

For your destiny card, Three of Spades often means turbulence, change and a self-determined future. It’ll be normal to face self-doubt and uncertainty however you’re equipped to handle anything the universe throws at you as long as you’re paying attention.

There are great rewards waiting for you but (much like the Four of Spades) you can miss out if you’re not taking advantage of the opportunities presented and even more so if you’re not being honest with yourself.

This card signals a time for reality – facing up to what’s happening and taking charge of your own destiny. Buckle up, it’s going to be a bumpy ride.

For your birth card, this card often represents mental, emotional physical and spiritual strength. You’re likely quite adaptable and able to flow with the changes that come your way. You might be called on to take charge and be a leader in times of chaos or upheaval.

This is not a symbol of easy wins rather it points to a time of challenges that you’ll be more than capable of overcoming. You have the strength, both internally and externally to see this through. Be courageous and don’t give up on your dreams.

For the spiritual journey, the Three of Spades is the symbol of spiritual travails. A quest for understanding something deeper and that often comes with a feeling that there’s something… more or greater out there for you.

This is a time of great change, and often it’s not easy. You may feel like you’re on your own in this journey and that can be a lonely place. However, know that you are not alone. You have allies and friends who are there for you.

Trust in your own ability but know that you have the option to reach out for help if you need to.

A Three of Spades in a dream is an important symbol and often a warning. Be aware of people in your life whose goals and aspirations might conflict with your own. They might not be actively or intentionally trying to get in your way but it’s important to be aware of them.

Be prepared for some obstacles and challenges in your path. Be ready to take on whatever comes your way. This is not a time to back down. There’s potential for great success but it won’t come easy. You have to be willing to work for it.

If this symbol is in your dreams then, at least on some level, you already know that something is off. You know where the source of this threat is coming from. Trust your instincts.

The Three of Spades can be seen as a symbol for change and not just the bad omen it’s commonly misread as. The sad reality is, most who read this message are going to switch away long before reading this. They’ll draw another card and tell themselves there’s nothing they need to do.

These are the people who are going to be hammered by this approaching change. They’ll have no control of their immediate destiny. Do not be one of these people. Take this message and seize control of your own future.