What is the Two of Hearts meaning when it appears in a Cartomancy or Tarot reading? Why do we call it the twin flame card?

The Two of Hearts is the symbol of a twin flame connection. An incredibly rare sign of one soul split into two parts. A divinely ordained connection that goes far beyond a ‘normal’ couple.

Too often the Hearts suit is misunderstood as just being about romantic relationships and that is part of this card but the meaning can actually go far deeper than that.

Two of Hearts in a Tarot Reading

To have your complete reading done for you let me do a free tarot reading on your behalf.

I find myself telling people to look beyond the suit in a cartomancy reading. The Hearts are almost always seen as looking purely at your romantic life but cards like the Ace of Hearts (for example) go far, far beyond that.

The Two of Hearts is… a little different. It can impact any aspect of your life but it does that through this incredibly strong connection with another person. I do specific twin flame Tarot readings but there’s no other single card that indicates this kind of connection by itself.

This card can be life-changing. Twin flames are so, so much more than just a romantic couple. They push each other forward in any and every aspect of their lives. They are two halves of the same whole and they know it.

If you’re lucky enough to have this card turn up in a reading, be prepared for big changes. Ones that will rock your world but in the best possible way. Embrace them – they’re a sign from the universe that you’re on the right track.

Two of Hearts Meaning for Love

For love life, this card means passion, romance, love, desire and so much more. I probably don’t have to tell you that the symbology of two hearts is an important sign of your romantic desires.

If you’ve never heard of the term ‘twin flame’ before we don’t really need to get into the nitty-gritty. At the physical level, this is a connection like nothing else you’ve ever experienced.

It’s not just meeting another person you’re attracted to. It’s meeting the other half of your very own soul. The yin to your yang. The sun to your moon.

If you receive this card in a spread focused on your love life then I don’t know what else to tell you. You’ve been blessed with something incredibly special and you should treat it as such. Buckle in, you’re in for something special.

Two of Hearts Meaning as Feelings

As an insight into someone else’s feelings for you this card isn’t immediately confirmation of a twin flame by itself but it does mean you feature in their life and they’ve certainly had romantic thoughts about you.

They might be undecided about how to approach you or whether they should even make a move but this card is telling you that there’s definitely something there. What comes of these feelings might rely on how you proceed. On some level they’re definitely interested in you even but they might not be consciously aware of the energy between you yet.

A common problem between twin flames in the earlier stages. It’s still an incredibly good sign but it might not immediately unfold as you’d like. One thing is for sure, however, if you’re seeing this card then the person is special and important to you – and you to them.

Two of Hearts Meaning as Advice 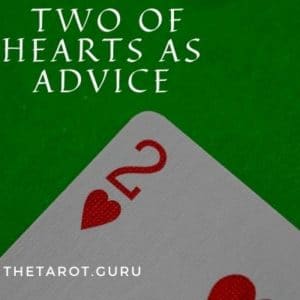 The Two of Hearts is advice to be patient and to work hard for what you want. There’s something big on your horizon but what you’ve been doing up until now isn’t going to be enough to take full advantage of the opportunity before you.

Sometimes it can be a message to examine the connections in your life. Have you been overlooking someone who might be important to you? Is there someone you constantly rely on or perhaps someone who’s looking to you for help at the moment? Sometimes the best way to further your own journey is to help others with their own.

Or it could be a sign that you need to start being more open with your feelings. Expressing yourself fully is the key to success right now and that means being honest with yourself and the universe as well as others around you.

Two of Hearts Yes or No

When given a simple yes or no question the Two of Hearts means yes – as long as the question has to do with another person. If the question is solely a personal one then the answer is no.

I don’t like using a single card for an answer like this. If you prefer, I can do a more in-depth yes or no tarot spread.

Two of Hearts for Job Interviews and Money

The Two of Hearts is not overly keen on financial abundance and doesn’t tell us much about your career or business future. It does tell us that your future is likely heavily dependent on how you treat and work with others around you.

If you are a twin flame – then relying on your journey and your twin flame to drive you forward will put you in a better position than anyone else to succeed. You’ll be incredibly capable and driven and the further you progress in your journey – the more obvious this will become to those around you.

The Two of Hearts can also be a warning. If you’re becoming too closed off from others then you’re going to be limiting your own growth. Nobody achieves everything themselves and you might need to learn to rely on others more.

As a destiny card, the Two of Hearts carries an interesting and complicated meaning. It usually means that the questioner is about to undergo a large spiritual growth and this will have an almost immediate impact on their physical reality. They might be feeling lost right now but soon they will find their path.

This is also a card of unions – both romantic and platonic ones. So any type of relationship is likely to grow and improve at this time. It’s a rare result for a destiny card and the opportunities in your immediate future will be something few others ever even dream of.

As a Birth card, the Two of Hearts symbolizes someone who is naturally gifted with the ability to connect deeply with others. Someone who others look to easily. They know how to make people feel comfortable and they have a natural ability to build strong connections with the people around them.

This person is likely to be successful in any field that involves working with or connecting with others. They are also likely to have an easy time finding love and maintaining healthy relationships.

This connection with others will bring a lot of opportunities in every aspect of your life but the potential risk here is that they don’t learn to draw lines and sometimes allow people to take advantage of them. They’ll need to watch out for this.

The spiritual meaning of the card should be clear by now. It’s a symbol of spiritual connections and this might mean a twin flame, a soulmate or just someone who’s incredibly important in many people’s lives.

The Two of Hearts is all about connecting with other people and the universe. It’s a message of growth and progress that will come from working together with those around you.

If you are currently feeling lost or alone then this is the perfect time to reach out and find someone to connect with.

If the Two of Hearts appears in a dream (or something symbolizing the card) it’s a sign that someone in your waking life is looking to you and trying to get your attention.

It might be a romantic connection but it’s certainly an important one. This person is trying to tell you something and it’s up to you to listen. Being able to hear their message will help further both of you towards better things.

Pay attention to the other symbols in the dream as they might give you a clue as to what this person is trying to say and who it is. On some level, you’re already aware of what this is but you’re just not ready to face it yet or perhaps there’s something (or someone) preventing you from seeing this other connection.

The Two of Hearts card has long been considered a symbol of love and is often called the twin flame card in cartomancy but there are a lot of deeper meanings hidden behind this card. It’s certainly an interesting card and presents a lot of opportunity in your future.