What is the Two of Spades meaning when it appears in a Cartomancy or Tarot reading? What warning does it carry and what can do you do about it?

The Two of Spades is a warning. Something (or someone) is actively working against you but there’s an opportunity for you to come out ahead.

The spade’s suit is often misunderstood as purely a bad omen. Yes, this card does mean something is in your way (actively or passively) but there’s an opportunity for you to overcome and be better for it.

So how do you make the most of this? First, we need to scratch below and understand the deeper meaning.

Two of Spades in a Tarot Reading

Don’t limit yourself to a single card. Let me go deeper with a free reading on your behalf.

When a Two of Spades arrives in a cartomancy spread – it’s a warning. Something or someone has conflicting interests to you and it’s going to create some form of disruption.

The good news is – there’s an opportunity here! This conflict or disruption can actually lead to a better situation if you’re able to overcome the challenge. Spot it early enough and you can come out ahead.

This opportunity won’t be easy but the sooner you spot it, the easier you’ll find it to see things go your way. It’s likely going to be hidden and not from an area of your life you’d expect.

Two of Spades Meaning for Love

If a Two of Spades arrives in a relationship cartomancy reading it can be a warning that someone else is interfering with your love life. This person could be a rival or someone who’s actively trying to slow you down for some other reason.

The card is a warning of a blockage but also an invitation of opportunity. Being able to spot the source of your love life blockage is going to open up a romantic connection unlike any you’ve previously experienced.

There’s a time crunch on this opportunity, however. A window of opportunity that will close. If you’re not able to spot the source of the obstacle sooner rather than later, it will slow you down or even stop you completely.

It might be you have an opportunity before you for a specific relationship. Whether that’s developing an existing bond or an exciting new person in your life – but there’s a limited timeframe to see it happen.

Two of Spades Meaning as Feelings

The Two of Spades tarot card can suggest there’s someone who is feeling two ways at once about you. They might be conflicted or trying to keep their feelings hidden from you.

This can be a difficult position for the other person and it’s likely they’ll feel like they’re walking on eggshells around you.

There are other cards that suggest uncertain feelings (like the Ace of Spades) but this one carries a very specific message here. It’s up to you to help them see you in the light you want to be seen in. Don’t wait for them to ‘figure it out’.

This is a time when you need to be very clear with your feelings and what you want. They’re already confused, make it easy for them.

Two of Spades Meaning as Advice 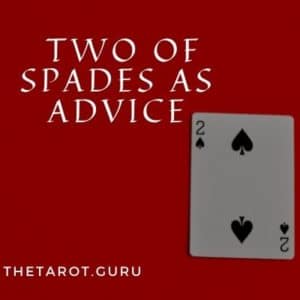 The Two of Spades is advice to trust others in your life that you know you can lean on but (at the same time) be on your guard. There is someone who is going to try and take advantage of you so it’s important to have a supportive group around you that can help.

Don’t be afraid to ask for help when you need it and be careful with new relationships – even if they seem good on the surface. This doesn’t mean you should distrust everyone.

Just question motives and be honest with yourself about the balance of relationships. Is anyone taking more than they’re offering back?

Two of Spades Yes or No

When given a simple yes or no question the Two of Spade tarot card suggests there is some form of disruption or conflict that will need to be overcome. It’s an opportunity for a better situation but it won’t be easy.

It means potentially ‘yes’ as long as you’re able to act on time. If you simply do nothing, the answer will be no.

Two of Spades for Job Interviews and Money

When a card is related to a financial future, the Two of Spades tarot card suggest some form of disruption that may cause you to lose money. This could be from a bad investment, debt, or theft.

But there’s opportunity in the turmoil. How you handle this turmoil will determine how successful you are in the short term. Stay calm, be smart, and don’t take unnecessary risks.

The Two of Spades tarot card can also suggest good news for job interviews. It means there is opportunity there but it’s not going to be easy. There may be some competition or the process won’t be straightforward.

For a destiny card, the message is important. It’s not going to be a boring ride. The energy headed your way is going to be intense but it’s also going to be exciting. You’re going to have an opportunity to show what you’re made of and it’s going to require all your focus, energy, and determination.

Don’t give up when the going gets tough. This is a chance for you to really shine and make your mark on the universe. To have your say in your path.

If a Two of Spades is a birth card, it represents a life of unexpected setbacks and struggles but also opportunities most will never see.

It won’t be a life born with a silver spoon but you’ll have a chance at things that moth could never dream of. You’ll be the one who makes something out of nothing. You’ll need to be resourceful and clever, but it can be done.

The Two of Spades tarot card suggests that you’re not afraid of hard work and you’re always looking for a chance to better your situation. You may have some hidden talents that will surprise others and (perhaps) even yourself.

Spiritually, this card means looking within. Even when your obstacles seem external sometimes the way forward is by examining yourself will better help you understand the world around you.

It’s a time for reflection and for learning from your mistakes. You need to be honest with yourself and question your motives. Are you doing this for yourself or for someone else?

This is also a time for self-care. I don’t mind just taking a Sunday morning lie-in or a day at the spa once in a while. I mean truly learning to love yourself.

The Two of Spades in a dream state could mean you are going through a lot of changes, not all good ones either. There’s a duality in your path right now and it’s up to you to find the balance.

There is also a message of conflict and disruption. This could be something in your personal life or even in the world around you. Don’t ignore it, it will only get worse. Address the problem head-on and don’t be afraid to stand by your beliefs even if others around you don’t understand it.

The card itself might appear in your dream or maybe just the symbology of the Two of Spades. Either way, the message is clear. Don’t let anyone else dictate your life for you.

The Two of Spades is both a symbol of hope and a warning. For those able to see the full message it can open up opportunities you wouldn’t dream of. For those who ignore it, it’s an omen of disaster.