What Is the Difference Between Oracle Cards and Tarot Cards?

While both decks can be used for guidance, insight, clarity, and much more, oracle cards and tarot decks have quite a few differences. Tarot is ancient and traditional, featuring a structured deck of cards that always have the same meanings. Oracle cards, on the other hand, are more free-flowing, with each deck having different images and meanings than the other.

Since tarot has been around for much longer, people tend to be more familiar with it than oracle cards. On the contrary, since tarot cards are much more structured, they can often intimidate people from trying to use them. Some people tend to start with oracle cards and then move on to tarot or vice versa.

So what is the difference between oracle cards and tarot cards? When should you use either? Is one better than the other?

Both can make great tools for personal growth so it is important to learn the differences and find which one may work better for you.

Note: If you get a card reading by me (I do free tarot spreads for readers) you’ll find I swap between tarot, oracle and angel cards. Sometimes I choose based on the specific question or goal of the reading and sometimes I just reach out my hand and see which deck calls to me.

Should I Start With Tarot or Oracle Decks? 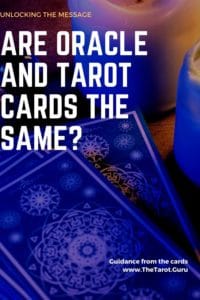 Sometimes you’ll come across a rule on the types of decks you can (or can’t) use. I don’t agree with these kinds of limits so the actual answer is to use whichever type of deck you like the look of. Whichever speaks to you. There’s nothing to say you can’t change your mind.

Generally, I’d say Oracle decks might be easier for a beginner to understand but (as we’ll get to in a moment) those decks can vary a lot so it really depends on the deck you choose. Some decks have very clear symbolisms but while the Rider-Waite tarot is standardized – reading into the combinations can be a little more complicated.

Oracle cards are often a more lighthearted way to seek guidance from a deck compared to tarot. Each deck is illustrated with different pictures and meanings, which can make them fun to collect and try. The decks may have specific themes or general messages, which are all open to your own personal interpretations.

Oracle cards almost always come with a guidebook on how to use the cards in each specific deck as well. This makes it easy for beginners to work with and keeps it interesting for those who use it as a common practice.

While oracles go all the way back to Greek times, oracle cards weren’t created until much later in time. The first printed version of oracle cards dates back to the 19th century in Western Europe. These cards were used as a divinatory tool, to seek knowledge about the unknown or the future from a spiritual perspective.

Over time, as oracle cards became more popular, more people began creating different decks with different meanings and images. While every deck is different, they are usually always for the same purpose; to gain knowledge and perspective.

There is no one specific structure for oracle cards. Each deck comes with its own rules and meanings. Oracle cards are guided and their meanings can be altered by the perspectives of those who use them. While tarot cards are always attached to the same meanings, this allows those who use oracle cards to personalize their experience and form their own sights based on the cards pulled.

Unlike tarot, oracle cards do not have a set number of cards in a deck. Each deck can include a completely different amount of cards as each deck features its own images, themes, and meanings. Most often, an oracle deck will come with about 36 to 64 cards, however, they have also been found to hold anywhere from 12 to 100 cards.

Tarot cards are traditional, powerful, and full of knowledge. These cards have been around for a long time because they are effective and their meanings invoke a lot of personal growth and insight. While tarot may take a bit longer to learn, it is a highly useful tool for your spiritual practices.

Most tarot decks do not come with instructions or guide books as they are all meant to be used in the same way. When you are first learning tarot, it is highly recommended to purchase a book that lays out the meanings of each card or familiarize yourself with them online through other means.

Despite their strict meanings, tarot cards were originally used as playing cards back in the 15th century when they were first created. Similar to oracle cards, they originated from Europe and were most popular there until they became more widely used as a divination tool in the 18th century.

The structure of the tarot is always the same no matter which deck you use. While it may take you a while to learn the meanings of the cards, once you have them down you won’t have to learn new rules for using a different tarot deck.

This structure of almost every tarot deck similarly reflects the Rider-Waite tarot deck created in the early 20th century. If you look more into this deck of cards it will help you gain more knowledge on how to use any new deck that you acquire.

Like playing cards, tarot cards have suits, pip cards (similar to ace through 10), the page, knight, king, and queen. Since tarot has ancient roots, the suits are represented as wands, cups, swords, and pentacles. These cards are always included in a tarot deck as it is representative of the minor arcana.

Overview of the Differences


While the information above goes into the details of the differences between the two types of cards, we have also included a more simplified list to help remind you of the main key points for each type of card deck.

Oracle vs Tarot: Which is Better?

Neither one is better than the other. Both decks can be used for insight, perspective, and divination. The two can even be combined and used together.

Overall, as the tarot reader, you will have to decide which method works better for your specific practice. Don’t be scared to dive in and try both to see which one you like better.