What is the King of Spades meaning when it appears in a Cartomancy or Tarot reading? How does it answer questions and what is it trying to tell you?

The King of Spades is a symbol that you’re about to face a major challenge. It’s a card associated with difficulty and often heralds someone actively working against you. If we look deeper into the message here, there’s a silver lining.

The challenges that the King of Spades brings will force you to grow as a person and learn new things. It’s an omen of triumph in adversity and a symbol of strength and power. Listening to the deeper message of the cards might tell you where these challenges come from and how to best overcome them.

King of Spades in a Tarot Reading

All cartomancy cards (especially the court cards) draw their full meaning from the other cards surrounding them. Don’t draw too much meaning from a single card but if you’d like a full insight I do free Tarot readings to give you deeper insight.

When a King of Spades appears on a Tarot spread it means you need to evaluate the people in your life who may be drawing more energy than they’re giving back. Whether intentionally or not, someone is either actively working against you or preventing you from moving onward. A

In the longer term, the King of Spades in your reading is a sign that you must be in control of yourself before you can successfully take charge of any situation. This king doesn’t just sit back and wait for others to do the hard work. He takes charge of his own destiny.

It is time for you to do the same.

When this card appears it means that if you are to move forward, then you must release anyone who does not support your efforts or is holding you back. This doesn’t mean you need to do it all alone. Merely make sure that those who you keep in your life are worth it.

The King of Spades uses his power to his advantage and won’t shy away from bending the rules if it will give him an edge. Cautious not to abuse this power, he does what he can for those around him all the while staying mindful of whom he can trust.

There’s some overlap here with the Nine of Spades meaning too. They both suggest a turbulent change is coming and they’re both commonly misunderstood as just a bad omen. If we truly look into these meanings you’ll see the cards don’t merely tell you bad things are going to happen. They offer us guidance on how to triumph and overcome – this is especially true for a court card like this.

King of Spades Meaning for Love

If your reading was focused on your love life, the King of Spades suggests some major upheaval. It might be that a connection isn’t working out the way you had hoped or, sometimes, that a third party is actively preventing it.

Don’t misunderstand this meaning. If we simply take that at face value this is a bad sign for an existing or new relationship but see this challenge as the King would. A chance to reevaluate what best serves him and push through it.

Sometimes past expectations or ways of thinking are holding you back more than you had noticed.

The King of Spades is typically viewed as one of the most powerful cards in the deck, and if he appears it usually signifies that you are in control. You have decided on your path and are pushing forward with all your might.

The King of Spades meaning for love can point to betrayal or cheating. The card may be showing up if you are involved with someone who has developed strong feelings for someone else and they aren’t sharing them with you.

King of Spades Meaning as Feelings

The King of Spades can give us an insight into how someone is feeling about you (whether that connection is romantic or otherwise). It’s an interesting card in this position but it is not necessarily about if they approve of you but more about how they portray their feelings to you.

This card often indicates someone who has lost more in their life than they like to let on. They’re often afraid of losing more and this can lead them to them being overprotective of those in their life or it can go to the other extreme and they find it difficult to connect with others because they’re afraid of getting hurt.

The person is connected with and concerned about you but that might not be manifesting the way you want it to you.

Remember, this card is about taking control of any situation. It might be that you need to show them they’re safe with you.

King of Spades Meaning as Advice 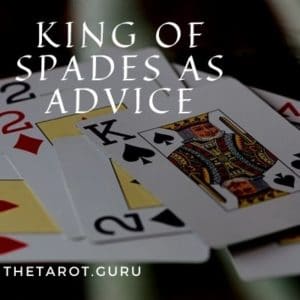 The King of Spades card can offer us advice in any aspect of life but if we wanted to boil it down to a single sentence:

Take charge and tell it like it is. Go forth and be the powerhouse you are. Take no prisoners or excuses.

It means that the questioner must be honest with themselves and others. Take a moment and absorb that advice because it’s very easy to immediately assume we’re being honest with ourselves.

They should not let fear hold them back from saying what they really think. This doesn’t mean you should go out of your way to hurt or offend people, but don’t let outdated dogma hold you back.

The King of Spades is also a warning, telling the querent to watch out for their own interests when dealing with partners or people in authority. The card warns against getting caught up in a situation that is too much for them to handle and taking advice from those worth listening to.

King of Spades Yes or No

For a simple yes or no question, the King of Spades tells you – yes, as long as you take ownership of the outcome.

This is not the card of just wishing something would happen. It’s the symbol of taking control and exerting your own power on the universe to manifest your desires.

This is the only card where you can ask the deck to give you a physical, tangible technique for helping you achieve your goal. It is a symbol of success but only if it’s something you truly exert yourself towards.

If you’re simply just waiting for it to happen then it’s probably a no.

King of Spades for Job Interviews and Money

When a reading is related to financial future or job-related matters, the King of Spades generally represents a serious, hardworking person with high ambitions. He is very successful in his career and others will look to him for leadership and guidance.

This can bode well for projects and goals that you’ve been actively working towards but doesn’t suggest good fortune will simply fall into your lap. You’ve worked hard for everything you have and, if you keep that up, you’ll see your physical abundance grow.

Depending on the other cards in your spread it might also be a warning. A king in business dealings could mean that a deal is going sour or that a co-worker is actively trying to take credit for your work.

It can also arrive when you’ve been struggling with debt because of a lack of focus or direction.

Take control of your own future. Be clear of what you really want and make it happen.

For someone’s destiny card, this card can tell us many things about the person. They’re a high-energy individual who will find no time for others that wallow in mediocrity. They’re a force to be reckoned with so the universe (and those around them) better get on board or get out of the way.

They expect a lot from themselves but also others in their life.

The King of Spades can sometimes mean someone who has a lot on their shoulders or is burdened with the expectations of others. This can put them under stress and tough times if they find themselves working for something they’re not truly interested in but these are often short-term.

For a birth card, it often means the need to sometimes take a breath and ask if they’re truly aligned with their inner guidance. This is a common theme with the spade’s suit but especially with the King.

Someone under this birth card will drive themselves (and others) harder than anyone else and won’t let up unless physically held back. This paves the road to success and grand adventure but has to be kept under check.

When this energy is devoted to the wrong direction it can backfire and bring stress to situations that don’t demand it. If the card is reversed, it means the querent needs to be more assertive. It can also mean someone else will take over the role that they are supposed to do themselves.

On the spiritual journey, the King of Spades is the symbol that represents the ability to finally take control over your own destiny. We throw this term around a lot (especially in Hollywood movies) but we often mean it in a generic sense.

This card means an actual opportunity to decide your own fate. Not just having the mild opportunity to perhaps do something one day – but the will and drive to seize the universe by the horns.

I’ve seen Cartomancy readings where the physical card bounced off the table and actually hit someone. When it arrives in a spread you should take the message as a literal slap in the face.

The spiritual meaning is advice for your physical actions. Take control of your future. Don’t just wait for it to happen or you’re not going to enjoy the outcome.

The King of Spades in your dream can tell you that there is a problem that you may be avoiding or you may need to face. It often shows up when you’ve been hiding from something or ignoring a problem.

He’s one of the most imposing cards in the deck and this card symbolizes power, action and authority. This means the dream can often feel controlling or even border on a nightmare.

The imagery of the card itself doesn’t need to appear in your dream. It might be represented by an imposing authority figure (such as a boss or teacher). You might find it hard to stand up for yourself and the symbology here is clear.

Look at your life. Identify the things you are hiding from rather than facing. They’re holding you back more than you realize.

The King of Spades is a powerful symbol with deep physical and spiritual meanings. When this card appears in your reading, it may be a sign that you need to pay attention to the messages and lessons that are coming your way – otherwise they’re going to run you over. This is not the time to let things play out it’s the time to decide your own fortune.